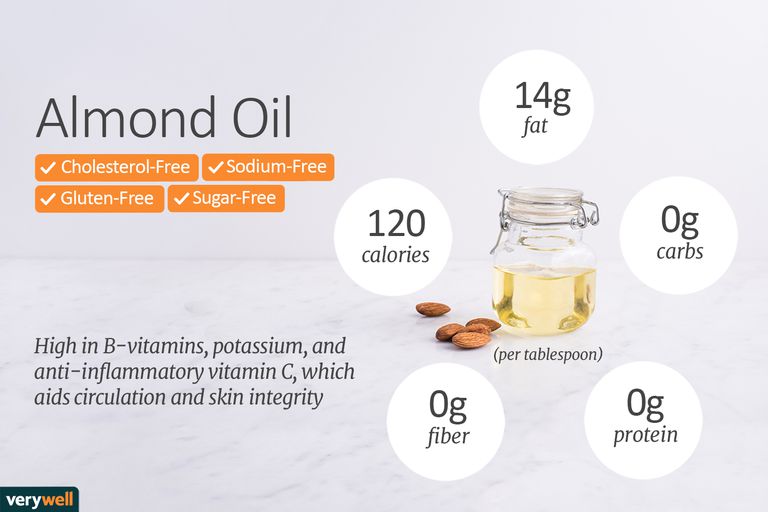 Almond oil—or sweet almond oil as it is often called—is the oil pressed from the fruit or drupe of the deciduous almond tree (Prunus dulcis). While almonds are commonly consumed by healthy eaters, almond oil is less popular. You can use sweet almond oil for skin and for hair health. There are also nutritional benefits that you’ll gain if you consume almond oil.

There are three different types of fat in almond oil.

You’ll also benefit from just over two grams of polyunsaturated fat when you consume a tablespoon of almond oil.

Polyunsaturated fatty acids, also called PUFAs,  have a positive effect on the cardiovascular system, so they are considered to be healthy fats. Both almonds and almond oil help boost your PUFA intake.

There are no carbohydrates in almond oil. The estimated glycemic load of almond oil is zero.

Even though almonds provide protein, there is no protein in almond oil.

Almond oil contributes vitamin E to your diet. You’ll get 5.3 milligrams of the vitamin or 26 percent of your recommended daily intake when you consume one tablespoon of almond oil.

Vitamin E, or alpha-tocopherol, plays an important role in cell metabolism and is believed to have anti-aging benefits. This important vitamin may also help to protect against certain diseases including cancer, cardiovascular disease, cataracts, and diabetes.

You will also get a small amount (just one microgram) of vitamin K in a tablespoon of almond oil. Vitamin K is essential for blood clotting functions.

Because almond oil is high in oleic acid (monounsaturated fat), you gain heart-healthy benefits when you consume it. Oleic acid is believed to lower LDL cholesterol (also known as “bad” cholesterol) to help decrease your risk for heart disease.

It is important to note that many of the health benefits of eating almonds are not gained when you consume almond oil. For example, almonds provide a quick boost of protein and fiber. Both protein and fiber help to keep you feel full longer. So if you are trying to reach or maintain a healthy weight, almonds are often considered a healthy snack.

But you won’t get protein or fiber when you consume almond oil.

What is almond oil good for?

Besides cooking, there are other popular uses for sweet almond oil:

What is the best way to store almond oil?

Most oils, especially those high in oleic acid,  should be stored in a cool dry place, out of direct sunlight.

Most people use almond oil for skin, hair, and beauty treatments, but the oil can be used in the kitchen.

Almond oil has a flash point that is similar to that of olive oil. The flash point, or smoking point, is the temperature at which an oil begins to smoke fumes. The smoking point of almond oil is about 420°F.  You can use almond oil to heat foods but it is not the best oil to use for high-temperature cooking

Almond oil can be used in salad dressing, marinades, and sauces. You can use almond oil in any recipe where you would use olive oil. However, almond oil does not impart the same flavor as olive oil so you may get a more bland taste when you use it.

If you have a nut allergy or specifically an almond allergy, you may want to avoid almond oil. Almond allergens can be contained in almond oil.

According to the American Academy of Allergy, Asthma, and Immunology (AAAAI), tree nut oils may pose a threat depending on the method of manufacture and processing. This includes topical use of the oil as they may cause a reaction when applied to the skin.

However, the experts at AAAAI note that cases of almond oil reactions are very rare (none were cited on the organization’s website). But they still advise caution, stating “the fact that almond oil can contain almond allergens, and finally the fact that we know cutaneous sensitization can occur, I would think that the most prudent thing to do is avoid almond oil completely if a patient has demonstrated allergy to almond oil.”