Amblyopia is an eye condition when the nerves that connect one of the eyes to the brain do not develop correctly during childhood. As a result, the person sends blurry or wrong images to their brain, which results in the brain ignoring the information and favoring the other eye. Patients are seen using one eye more or may have problems with depth perception. Two to three out of every 100 children have the condition, according to the National Institutes of Health. 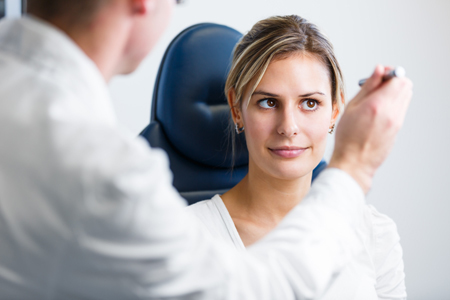 Vision impairment becomes permanent because as the child’s brain matures, it will “ignore” the image coming from the poorly seeing eye. Without treatment it can lead to a permanent loss of vision in the weak eye.

All children should be screened before they are school-age. Check three aspects of your child’s eye health:

Some eye care experts recommend an exam by an eye doctor at 6 months, 3 years, and then every two years in the school years.

Family history of amblyopia is a risk factor for the condition. Parents cannot tell just by looking at their child if they have amblyopia.

Early diagnosis and treatment are the keys to the best visual outcome. Lazy eye can be treated with prescription lenses, prisms, and eye patches, according to the American Optometric Association said. Vision therapy — when the two eyes are trained to work in unison — may prevent the problem from coming back.  The treatment  with eye patches involves the covering of the strong eye with a patch so that the child is forced to use their lazy eye. The child has to wear the patch for much of the day over many months, which can be frustrating and unpleasant.

Recently, Canadian doctors say they have found an inventive way to treat lazy eye – playing the Tetris video game. According to The McGill University team this popular tile-matching puzzle could train both eyes to work together.

Dr Robert Hess and colleagues in Montreal armed with a special pair of video goggles set up an experiment that would make both eyes work as a team.

The goggles allowed one eye to see only the falling objects, while the other eye could see only the blocks that accumulate on the ground in the game. For comparison, another group of nine volunteers with amblyopia wore similar goggles but had their good eye covered, and watched the whole game through only their lazy eye.

It was observed that forcing both eyes to co-operate increases the level of plasticity or adaptability in the brain and allows the weak eye to relearn how to see.

Comments Off on Amblyopia or Lazy Eyes