Could a Flu Patch Bring an End to Flu Shots? 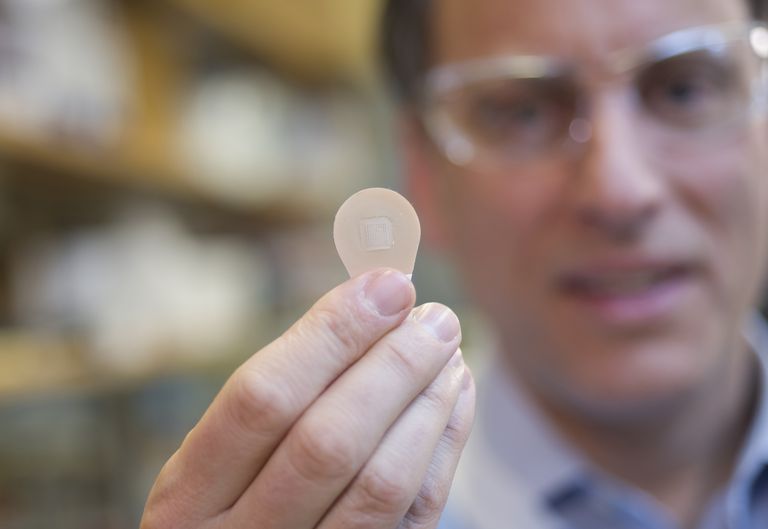 If you hate getting flu shots because you don’t like needles, you could soon be in luck. Researchers at the Georgia Institute of Technology and Emory University have developed a flu patch that appears to be as effective as the traditional flu vaccine injection. Although it it is still in the trial phase, completed studies are promising.

The flu patch is a self adhesive patch that contains 100 water-soluble microneedles that dissolve into the skin. The needles dissolve within minutes of the patch—which is about the size of a band-aid—being applied to the skin. The patch can then be removed and discarded with regular trash. Because the microneedles dissolve, there is no need for disposal in a sharps container.

Another significant benefit of the flu patch is that is could be delivered in the mail and self-administered. It requires no special training to put on and does not require refrigeration. This would eliminate the need for most people to go to a doctor’s office or pharmacy to get a flu vaccine each season.

Developers and public health officials hope that the ease of administration and convenience of home delivery would significantly increase flu vaccination rates.

As of September 2017, the flu patch is still in the trial phase and is not available to the general public. Results of a study funded by the National Institutes of Health (NIH) were published online in the journal, The Lancet, on June 27, 2017. The study enrolled 100 adult participants that were divided into four random groups.

Immune responses measured through blood samples were essentially the same in the groups receiving the flu patch (either administered by health care provider or the patient) both soon after administration and six months later. Study results are very promising. Side effects in all groups were minimal. The most common reactions to the flu patch were tenderness, redness, and itching at the administration site.

Larger scale studies will be needed before this technology will be available to the general public but researchers are hopeful that it will continue to prove safe and effective. They also hope that the patch technology could be used to administer other types of vaccines as well.

With constant development and research, technology is always advancing. If you don’t like needles, you don’t necessarily have to get a traditional flu shot in order to be vaccinated. Although the intranasal flu vaccine is not recommended as of the fall of 2016, there are still other options. Adults can get the intradermal flu shot, which is administered through a tiny needle that only penetrates the skin instead of the muscle.

There is also a flu vaccine administered by jet injector, which doesn’t use a needle at all. The device “uses a high pressure, narrow stream of fluid to penetrate the skin,” according to the CDC.

There are multiple types of traditionally injected vaccines as well, including high dose flu vaccines for older adults, quadrivalent flu vaccine which contains four strains of influenza instead of three, and cell based flu vaccines which are not grown in eggs, so they are safe for people even with severe egg allergies.

Getting vaccinated against the flu is important. You will protect not only yourself, but those around you that may be at high risk for complications from the disease. Thousands of people die each year from influenza and complications that develop from it. Taking the time to get vaccinated could literally save a life—maybe even your own.

Comments Off on Could a Flu Patch Bring an End to Flu Shots?