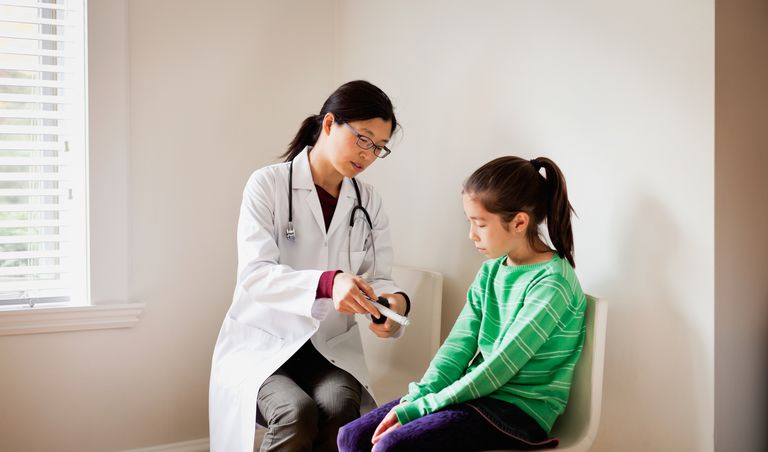 How Is Type 1 Diabetes Diagnosed?

Because symptoms begin to appear quickly once the pancreas shuts down its production of insulin, most people are diagnosed within a short period of time from when the symptoms begin. In some cases, it may take longer. Diagnosing diabetes requires a blood sample to measure glucose levels in the blood.

What Tests Are Used?

There are three standard tests used for diagnosing type 1 diabetes. The type of test used for any particular person depends on the situation and the doctor’s preference. These tests are:

In an FBG test, a blood sample is obtained after a period of fasting for at least eight hours. This usually means no food or drink (except water) is taken after midnight on the night before the test. A blood sample is usually drawn early the next day before any food is eaten or beverages consumed. If the results of this test revealed a glucose reading of 126 mg/dl or higher it indicates diabetes. To confirm the diagnosis, it is usually necessary to repeat the test a second time on a different day. Fasting glucose levels are normally between 70 to 110 mg/dl in a person without diabetes. The FBG test is the most commonly used test for diagnosing diabetes.​

In a random blood glucose test, a blood sample is also tested to measure your glucose but there is no consideration given to when you ate your last meal. A glucose level of more than 200 mg/dl indicates that you have diabetes.

This is the preferred glucose test used in medical emergencies when a person (most often a child) has such high glucose levels they may be drifting into a diabetes-induced coma. Within minutes of using this test, medical personnel can determine how much glucose is in the blood and administer insulin if type 1 diabetes is confirmed as the diagnosis.

This diagnostic test, called the oral glucose tolerance test, differs from the other two because you are asked to drink a sugary beverage as a way to measure how your pancreas can manage the glucose you take in. Before you drink the beverage, a baseline fasting blood glucose is taken. You then drink the beverage and over the next two hours, blood glucose levels are taken every 30 minutes. In a person without diabetes, glucose levels rise and then fall quickly because the body naturally produces insulin to lower the blood glucose. In contrast, a person with type 1 diabetes will see a sharp rise and a sustained high level of glucose because the pancreas is unable to deliver the needed insulin to lower the glucose in the blood.

If your blood glucose at the two-hour mark is below 140 mg/dl, your blood sugar is considered normal. A reading that exceeds 200 mg/dl after the same time period indicates diabetes. If glucose levels are higher than 200 mg/dl, the test should be repeated on a different day to confirm the diagnosis.

The hemoglobin A1c test has traditionally been a measure of long-term control of glucose levels in the bloodstream. But in 2010, the American Diabetes Association recommended that the test also is used as another option for diagnosing diabetes and prediabetes. Though using the A1c test would more often be used for diagnosing type 2 diabetes, it deserves mention here because it could also be used to diagnose type 1.

When glucose test results on the A1c measure 6.5 percent or higher on blood hemoglobin, it is considered a diagnosis for diabetes. The advantages of using the A1c test over plasma glucose is that it takes less time and is more convenient than the oral glucose tolerance test and does not require fasting before the test is performed.

Other tests may be performed (such as thyroid) to determine if there are any other autoimmune antibodies present. For all of these tests to give reliable results, you must be free from infections and viruses and not be taking medicines that could affect your blood glucose.

Comments Off on Diagnosis of Type 1 Diabetes