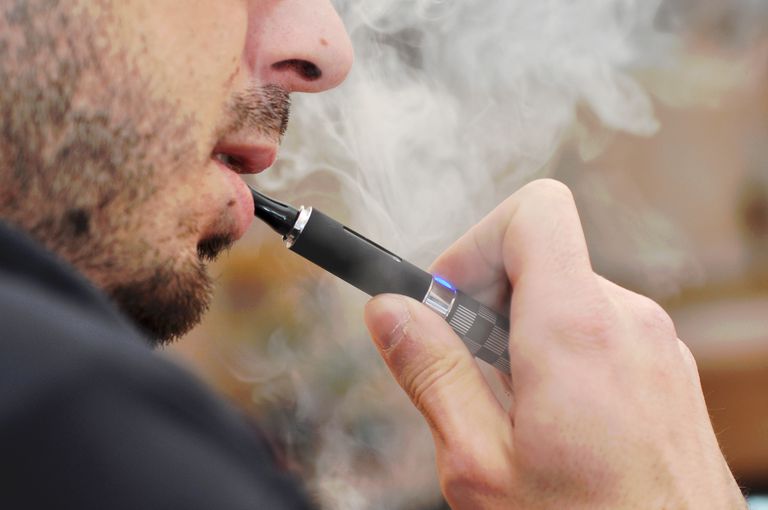 Are e-cigarettes safe for people with cancer? What if they are being used to help a person quit smoking? The research on e-cigarettes is still young, but what do we know about the nicotine and toxins in this smoking alternative?

What Are the Risks of Smoking When a Person Has Cancer?

We know that cigarette smoking can cause many diseases including cancer, but in what ways does it affect somebody who already has cancer? There are actually many ways in which cigarettes may be detrimental including:

Learn more about the important reasons to quit smoking if you have cancer.

Are E-Cigarettes Safer Than Cigarettes for People With Cancer?

Certainly, e-cigarettes might spare people the exposure to tar and some of the multitude of chemicals in cigarette smoke (some e-cigarettes have been found to have formaldehyde as well as heavy metals) but they usually contain nicotine. So what do we know about nicotine in people with cancer?

What Is the Effect of Nicotine on People With Cancer?

There has been a debate on whether nicotine can cause cancer, but there is evidence that nicotine may be involved in the progression of cancer. Findings with different cancers looking at this question from different angles have found that:

It’s thought that nicotine may promote cancer due to its ability to damage DNA, disrupt metabolic processes in the cell, and by fueling the growth and spread of cancer cells.

Nicotine may not only influence the growth of cancer but interfere with the treatments of cancer as well. For example, nicotine was found to promote resistance to the chemotherapy drug Platinol (cisplatin) in lung cancer cells, a treatment which is part of most chemotherapy regimens for the disease.

Nicotine and Toxins in E-Cigarettes vs. Nicotine Replacement Therapy

If we were able to compare the amount of nicotine in cigarettes with that in e-cigarettes and nicotine replacement therapy products, we may have some idea on how this risk would compare.

Unfortunately, since e-cigarettes were not regulated by the FDA until August 8, 2016, we have not known about the amount of nicotine present in these products. In contrast, pharmaceutical grade nicotine is used in all nicotine replacement therapy products in the United States such as nicotine patches, gum, inhalers, lozenges, or nasal spray.

Other concerns remain. For example, one study found that a particular type of e-cigarette increased carbon monoxide levels in the blood. Whether this is common, how it compares to carbon monoxide from combustible cigarettes, and what this may mean for people with cancer isn’t yet known.

The jury is out as well on the role e-cigarettes may have as a smoking cessation product but at the current time, many experts believe that e-cigarettes should be considered a tobacco substitute and not a quit aid.

Do E-Cigarettes Cause Cancer?

A question that many people may be asking at this point is whether e-cigarettes can cause cancer. If you are living with cancer, the first concern is the role that e-cigs may play in the progression of cancer. As noted with nicotine above, we are still uncertain whether it can cause cancer to begin, but many studies tell us that it may contribute to the progression of a cancer already present.

At the current time, we don’t know exactly what effect e-cigarettes may have on the causation of cancer. it is simply too early to know. We do know that some e-cigarettes contain chemicals known to cause cancer.

Bottom Line on E-Cigarettes for People With Cancer

E-cigarettes may be somewhat safer than regular cigarettes for people with cancer, but still, carry risks due to the presence of nicotine. Several studies have found that nicotine alone may contribute to the progression of cancer.

If you or a loved one are seriously motivated to give up smoking due to having cancer, the best choice would be to use a quit aid combined with counseling and support. Unfortunately, far too many people transfer their addiction from regular cigarettes to e-cigarettes and never truly give up the habit.

It could be argued that e-cigarettes might be better from someone who would otherwise continue to smoke, but even the fact that you are reading this page shows that you have some motivation to improve your health, and response to cancer treatment.

Quitting Smoking If You Have Cancer

There are clearly many benefits to quitting smoking if you have cancer, not just with regard to survival or quality of life, but concerning your response to nearly every type of cancer treatment. It could easily be argued that smoking cessation should be considered an integral part of your treatment, no less important than treatments such as chemotherapy or radiation.

There are few things less important than taking an honest and heartfelt look at how you can quit. Begin by learning the steps to take to ensure success when you quit. Then consider the wide range of quit aids available which can sometimes ease the discomfort of quitting. Then set your quit date.

Quitting is most successful when you don’t have to do it alone. Consider the people in your life who could be your cheerleaders. Is there someone you can be accountable to who you respect, perhaps even a friend or family member who has kicked the habit in the past? Foster a mindset that will help you quit for good.