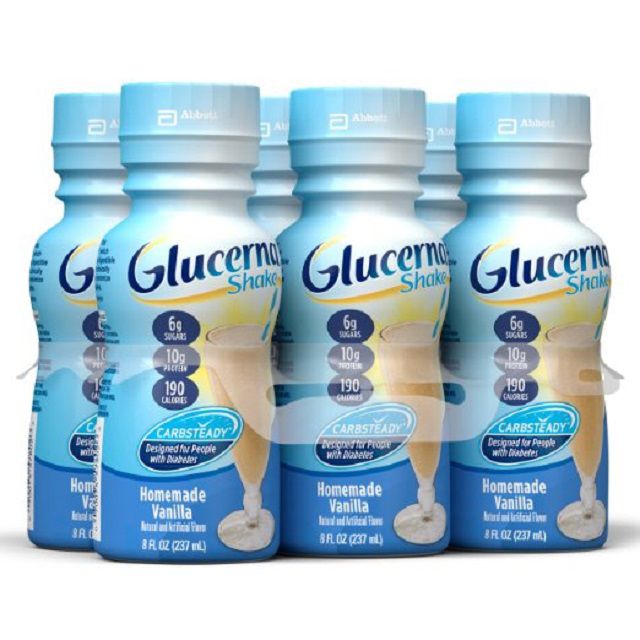 The Glucerna product line is comprised of four flavors:

Glucerna also offers meal replacement bars which, like the shakes, are low in sugar and carbs but high in protein. Moreover, Glucerna products are all gluten-free, kosher, halaal, and suitable for those who are lactose intolerant.

Glucerna shakes are manufactured to the specifications of the American Diabetes Association and American Heart Association, which favor monounsaturated fats and limited calories from saturated fat—at a max of four percent.

An eight-ounce bottle of Glucerna Homemade Vanilla has the following nutritional values:

Balancing the Pros and Cons

Glucerna shakes offer benefits for people either trying to lose weight or maintain tighter control of their blood sugar. But they also have a few shortcomings, particularly for those who do not have diabetes. Among the considerations:

Glucerna shakes are a surprisingly tasty, vitamin-fortified snack ideal for people with diabetes and those trying to lose weight. The products are well-balanced with a low carb load and enough protein to offer a nutritional boost.

While they will not provide enough carbs and calories for a total meal replacement, they could certainly be used as a nutritional supplement as part of a balanced diet plan (especially when extra calories or protein is needed).

It’s important to note also that research suggests that fructose and artificial sweeteners may alter glycemic control in those with diabetes and may pose a risk of type 2 diabetes in those who do not have the disease. As such, Glucerna shakes should be considered an occasional snack or supplement rather than a regular source of food replacement.

In the end, it is always better to eat real protein rather those derived from processed foods, including packaged shakes.