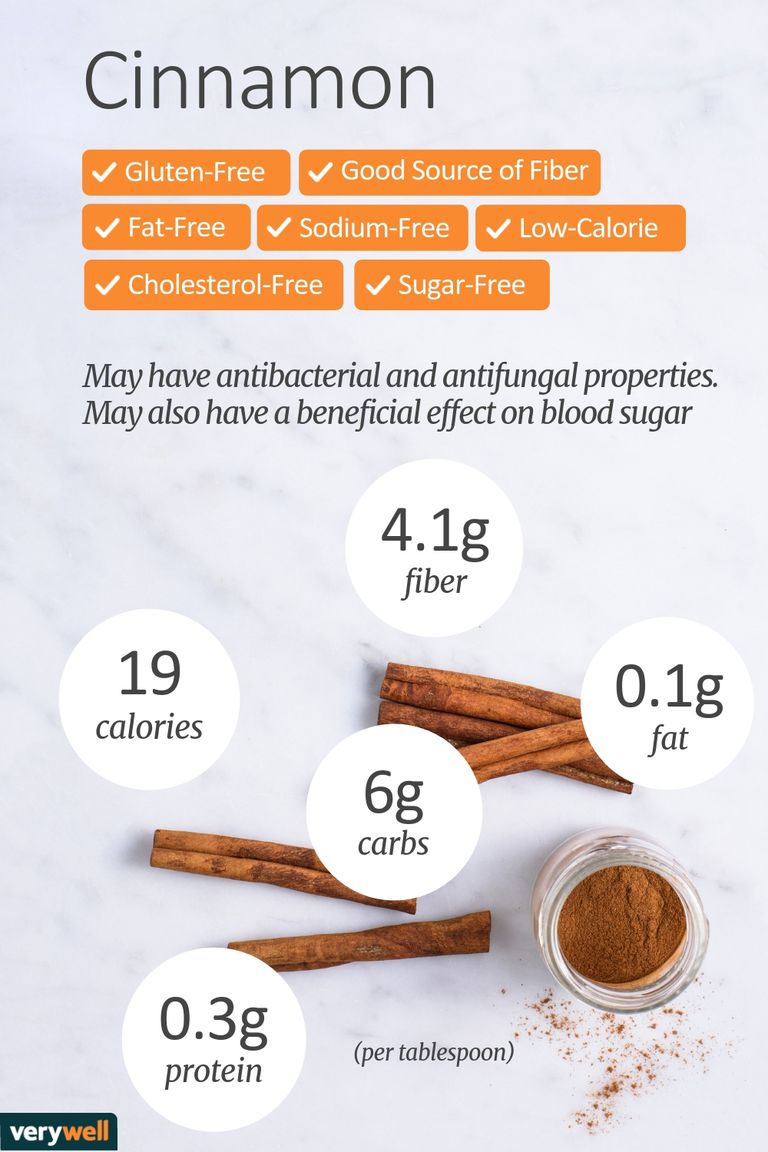 Cinnamon is a spice that people rely on when making everything from apple pie to French toast. It is made from the bark of the cinnamon tree and is either rolled into cinnamon sticks (called quills) or ground into a fine powder.

Beyond its use in cooking, cinnamon is believed to have medicinal properties. Alternative practitioners believe that cinnamon can lower blood sugar, treat superficial fungal infections, and reduce inflammation and pain. The current research remains split on whether cinnamon can deliver on these promises.

Cinnamon has been used for centuries in traditional medicine. In traditional Chinese medicine, Cassia cinnamon is used for colds, flatulence, nausea, diarrhea, and painful menstrual periods. It is also believed to improve energy, vitality, and circulation, particularly in people with cold feet.

In Ayurvedic medicine, cinnamon is used as a remedy for diabetes, indigestion, and colds, and can help balance a person’s kapha (physical and emotional energies). It is also a common ingredient in chai tea and cinnamon tea, both of which are believed to improve digestion.

Alternative practitioners attribute numerous therapeutic properties to cinnamon, most especially Ceylon cinnamon. Among the conditions cinnamon is believed to treat are:

Cinnamon’s characteristic flavor and aroma come from a compound in the essential oil called cinnamaldehyde. Cinnamaldehyde is known to exert antimicrobial and anti-inflammatory properties that may help treat certain metabolic, infectious, digestive, or respiratory disorders. Here is some of what the current evidence says:

Studies have found that cinnamon can help lower blood sugar. By doing so, it may be beneficial to people on diabetes medications or those with prediabetes who want to delay therapy.

A 2003 study published in Diabetes Care evaluated the benefits of a daily dose of cinnamon in 60 people with type 2 diabetes. Divided into groups of 20, the groups were given, respectively, 1-, 3-, and 6-grams doses of cinnamon in tablet form (an amount roughly equivalent to one-quarter teaspoon to 1 teaspoon).

After 40 days, all three groups experienced a reduction in their fasting glucose (by 18 to 29 percent), triglycerides (23 to 30 percent), LDL cholesterol (7 to 27 percent), and total cholesterol (12 to 26 percent). By contrast, the hemoglobin A1C (HbA1C) remained unchanged in all participants.

Reductions of this level may be robust enough to treat metabolic syndrome. A 2016 review of studies concluded that cinnamon, taken medicinally, could potentially improve all key measures for metabolic syndrome, including body mass index (BMI), waist-to-hip ratio, the blood lipid profile, and blood pressure.

This is not to suggest that the metabolic benefits of cinnamon are uncontested. There are few well-controlled studies currently available (included those listed above).

A 2010 review from Germany, evaluating high-quality randomized controlled trials, concluded that cinnamon’s benefit in controlling blood sugar was “promising” but that its impact on weight loss and blood pressure remains largely unsubstantiated.

Studies have found that cinnamon has antibacterial and antifungal properties. In test tube research, cinnamon is active against both Candida albicans, the fungus that causes yeast infections and thrush, and Helicobacter pylori, the bacteria responsible for stomach ulcers.

Cinnamon appears most effective when used as a topical agent. When applied to dentures, cinnamon essential oil was able to neutralize 50 percent of Candida strains, according to research published in the Journal of Clinical and Diagnostic Research. Moreover, the oil was seen to be effective against strains resistant to the antifungal drug Diflucan (fluconazole).

Unfortunately, there is little evidence that cinnamon has the same effect when taken orally. This is especially true with H. pylori. Current research suggests that cinnamon supplements fall well beyond the therapeutic threshold needed to eradicate this hard-to-treat bacteria.

Sipping cinnamon tea is a common, homespun remedy for indigestion. In looking at its effect on digestion, researchers in Australia conducted a pilot study involving the effects of two cinnamon-containing remedies on 31 people with irritable bowel syndrome (IBS). One remedy was designed for constipation-predominant IBS (IBS-C) and the other for diarrhea-dominant IBS (IBS-D).

The participants treated for IBS-C experienced a 20 percent increase in bowel movements as well as a reduction in straining, abdominal pain, and bloating. Those treated for IBS-D had no response to treatment.

This suggests that cinnamon may either promote intestinal motility or have a mild laxative effect. Beyond this, there remains little evidence that cinnamon can treat diarrhea. Moreover, the overconsumption of cinnamon may lead to heartburn, exacerbating the symptoms of indigestion.

Herbs and Natural Remedies for IBS

Cinnamon essential oil, when used for aromatherapy, may help ease congestion, improve mood, and boost energy. While some alternative therapists believe that it can also strengthen the immune system, thereby preventing colds and flu, there is no evidence that cinnamon in any form affects the immune response, either innate or adaptive.

Where cinnamon may help is in the alleviation of the nasal symptoms accompanying colds, flu, and hay fever. A 2014 study in the Journal of Herbal Medicine reported that a nasal spray containing cinnamon extract improved nasal symptoms in 20 people with allergic rhinitis compared to 20 given a placebo. After four weeks, the twice-daily spray improved pulmonary function measures with no notable side effects.

Cassia cinnamon, the kind normally found in grocery stores, contains high concentrations of a compound called coumarin. If consumed in high doses, cinnamon can cause heartburn, indigestion, and mild sweating. Over time, the accumulation of coumarin in the body can impede blood clotting and lead to liver damage.

Cinnamon supplements should be avoided in people taking blood thinners like Coumadin (warfarin) as this can lead to bleeding problems, including bruising and nosebleeds. Do not take a cinnamon supplement before surgery or a dental procedure.

People taking diabetes medications shouldn’t take therapeutic doses of cinnamon unless under a doctor’s supervision. Taking them together may have an additive effect and cause blood sugar levels to dip dramatically, leading to hypoglycemia.

Cinnamon essential oil is highly potent and may cause nausea, vomiting, diarrhea, and dizziness if taken internally. While a single drop in a cup of tea may not do you any harm, anything more should be avoided, even if the oil is “therapeutic grade.”

If used topically, cinnamon essential oil should be diluted in a carrier oil like almond oil or jojoba oil. If left undiluted, cinnamon oil can cause skin irritation, redness, rash, and a burning sensation. Never apply cinnamon vaginally to treat a yeast infection.

Cinammon can also trigger an allergic response in some people, usually mild to moderate in severity. Symptoms can include rash, nasal congestion, dizziness, or nausea.

Call 911 or rush to your nearest emergency room if you develop wheezing, shortness of breath, facial or throat swelling, vomiting, or abnormal heart rate after taking a cinnamon supplement.

The safety of cinnamon supplements in pregnant women, breastfeeding women, and children has not been established.

How to Treat a Cinnamon Allergy

There is no recommended dose of cinnamon supplements or extracts. When used in tablet form, many supplement manufacturers will recommend between 1 gram and 6 grams daily, usually taken with a carbohydrate-rich meal to avoid side effects.

Ceylon cinnamon is always the better option for therapeutic use as it contains far less coumarin than Cassia cinnamon.

You can buy cinnamon supplements online or at many health food stores or supplement stores. Most are offered in either a 500-milligram (0.5 gram) or 1,000-milligram (1 gram) dose.

Cinnamon extract is also available in gel cap formulations. The type offered in a dropper bottle is mostly used for cooking and can vary considerably in concentration.

To ensure the utmost safety and quality, choose supplements that have been tested and approved by a recognized certifying body such as the U.S. Pharmacopeia (USP), NSF International, or ConsumerLab.

When purchasing cinnamon essential oil, always look for organic oils with both a distillation and expiry date on the label. There should also be a listed country of origin as well as a botanical name. Since there is no standard definition of purity for essential oils, these details can separate the good oils from the bad.

If using cinnamon oil topically, dilute it with a carrier oil like almond oil or jojoba oil before applying to the skin. A maximum 5 percent concentration (or roughly 30 drops of essential oil to one ounce of carrier oil) is considered safe for adults.

Cinnamon essential oil should never be applied directly to the skin or taken internally, even if it has been classified as “therapeutic grade.”

Comments Off on Health Benefits of Cinnamon calorie counts