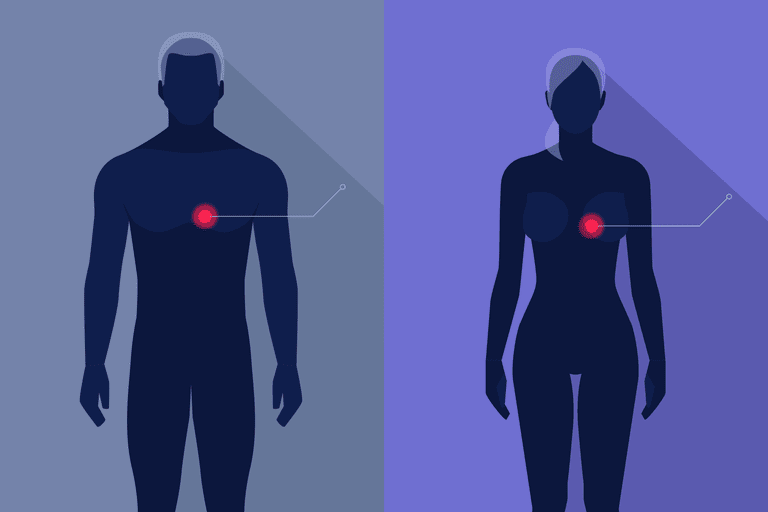 A woman’s heart looks just like a man’s, but there are significant differences. For example, a woman’s heart is usually smaller as are some of its interior chambers. The walls that divide some of these chambers are thinner. A woman’s heart pumps faster than a man’s, but ejects about 10 percent less blood with each squeeze. When a woman is stressed, her pulse rate rises and her heart ejects more blood. When a man is stressed, the arteries of his heart constrict, raising his blood pressure.

Why do these differences matter? They matter because gender plays a role in the symptoms, treatments, and outcomes of some common heart diseases.

CAD, the leading cause of heart attack, is the same process in men and women. Extra fats circulating in the blood are deposited in the walls of the heart’s arteries, forming deposits called plaques. When these plaques grow slowly, they become hard and gradually narrow the artery, interfering with blood flow. More often the plaques remain soft and become unstable and rupture. This triggers a cascade of events that produces a blood clot that stops blood flow. Either way, the result is a heart attack.

Despite this process, women have risk factors for CAD that men don’t have. They also tend to have different symptoms of heart attack. When symptoms appear, CAD may be more difficult to diagnose using conventional testing methods.

Heart failure in men is usually caused by damage from a heart attack that prevents the muscle from contracting as forcefully as it should. On the other hand, women are more likely to develop heart failure when high blood pressure, chronic kidney disease, or other condition prevents their heart muscle from relaxing properly between beats. Women with this type of heart failure generally live longer than men with heart failure. But, they need frequent hospitalizations for shortness of breath, have limited physical ability, and are more likely to need nursing home care.

Atrial fibrillation (afib) is a condition that causes the heart to beat in an irregular, often rapid, rhythm. Recent studies have found that women with afib have more symptoms, a worse quality of life, a higher likelihood of stroke, and worse outcomes than men. They also are more likely to be treated for afib with catheter ablation, but more likely to be re-hospitalized for afib after the procedure than men. Despite these problems, women who receive treatment for afib are more likely to survive longer and are less likely to die from a heart problem than men with afib.

Whether you are a man or a woman, it’s never too late to lower your chance of experiencing a heart attack. Here is what you need to do:

Dr. Cho is a cardiologist and section head at Cleveland Clinic’s Tomsich Family Department of Cardiovascular Medicine. She is also the Director of the Women’s Cardiovascular Center.

Comments Off on Heart Disease: Men vs. Women