Hot Yoga has now become very popular in the US and Europe. The proponent of practice of ‘hot yoga’ are concerned to know the risks associated with performing the same. Women Fitness brings to you a complete resource to understand this concern.

Hot yoga is a huge craze at the moment. It’s getting more difficult to find a studio that isn’t heated, and all modalities are taught in a heated environment from the standard Bikram to Vinyasa. The facts can help you make the decision yourself, whether yoga in external heat is your friend or your enemy. Yoga has gotten hotter. An increasing number of yoga studios and gyms offer classes in Bikram yoga, developed by Bikram Choudhury (“guru to the stars”) in the 1970s, or other versions of “hot yoga,” such as CorePower Yoga and Evolution. Bikram Choudhury, the 66-year-old Indian-born yoga guru, the precise sequence of 26 postures and two breathing exercises must be performed within 90 minutes in a heated (100-degrees-plus) room to allow the body to stretch, detoxify, relieve stress, tone, and heal chronic pain such as arthritis, joint aches, knee injuries, back problems, and more.

If you decide to try a class, don’t expect your instructor to demonstrate the moves. In Bikram, they’re trained to talk you through the flow as part of a moving meditation (listening to these directions forces practitioners to stop thinking and be in the moment). No matter where you practice in the world, the dialogue between the teacher and the student stays pretty much the same..

Every studio has a soft carpet, which is more forgiving to joints than hardwood floors. “These days many studios have an anti-bacterial carpet that gets cleaned regularly,” assures Maria McBride, owner and founder of Bikram Yoga Natick in Massachusetts and Lululemon Athletica ambassador. “So if it stinks when you walk in that’s good! It’s not dirt, but just sweat, which is what we want,” she says. 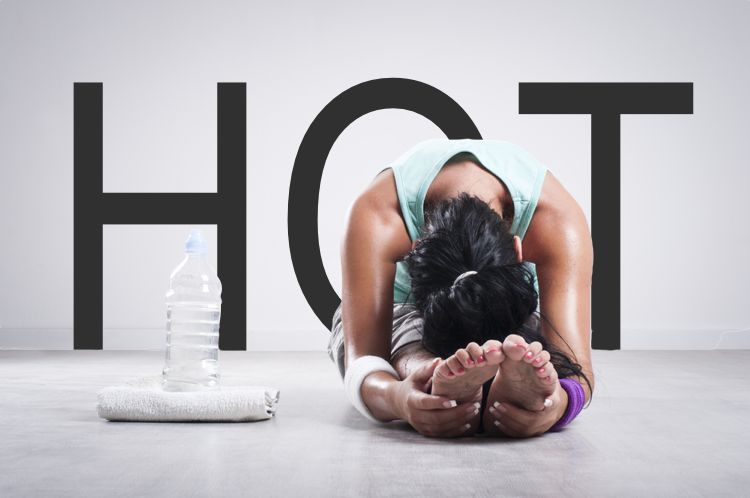 Devoted hot yogis swear by the activity’s many benefits. Others roll their eyes and wonder: Is it even safe to work out at 104 degrees? Here’s what the experts say: Start poking around for hard science on Bikram or “hot” yoga, and you’ll find something curious: There’s not much of it. “Considering how popular this is, it’s pretty shocking that the study is one of the very first published research efforts on the subject,” says Dr. Brian L. Tracy, an exercise scientist at Colorado State University.

Tracy and his team have conducted two experiments on the physical effects of Bikram yoga, which involves completing a strict series of poses over a period of 90 minutes in a room heated to 104 or 105 degrees. The first experiment included healthy (but sedentary) young adults with no yoga experience. After eight weeks and 24 Bikram sessions, Tracy says the study participants showed some modest increases in strength and muscle control, as well as a big improvement in balance. They also achieved a slight drop in body weight. “To be honest, we were pretty surprised by the small size of the weight change, because when you’re in the Bikram studio you feel like you’re working really hard,” Tracy says. “And remember, these were people who didn’t regularly exercise before the study. We were expecting a bigger drop.”

For his follow-up experiment, Tracy hooked up experienced yogis to equipment designed to measure their heart rates, body temperatures, and energy expenditures during a typical Bikram session. That new data helped explain some of those disappointing body-weight findings: While heart rate and core temp climbed significantly (but not dangerously) during the 90-minute session, the participants’ metabolic rates—or the amount of calories their bodies burned—were roughly equivalent to those of people walking briskly. “I think the immediate reaction is disappointment if you’re a Bikram fan,” Tracy says, adding that, if you’ve spent time reading about the activity online, you might assume you’d be shedding up to 1,000 calories per session. “But that’s not the case,” he says. His research shows men burn an average of 460 calories, while women work off about 330. “I think the heat and the difficulty of the postures combine to alter your perception of the intensity of the exercise,” he explains. On the other hand, one part of your body is getting a major workout, Tracy says. “Heart rates are quite high for the amount of work you’re doing. Quite high.”

Is that something you should worry about, though? “Potentially,” says Dr. Kim Allan Williams, president-elect of the American College of Cardiology. When you’re hot, your heart pumps large volumes of blood to the vessels in your skin where, through a process called convection, sweat is produced. “And it’s actually not the sweat, but the sweat’s evaporation that helps cool you off,” he explains. “Sweat does not evaporate efficiently in those conditions,” he adds.

What does this have to do with hot yoga? The humidity in Bikram yoga studios is supposed to be kept at 40 percent. But in reality, Tracy says it’s tough to know how often that goal is achieved or maintained. As the humidity climbs and your heart keeps working to cool you off, you’re sweating out minerals like potassium and sodium, along with H20, Williams says. “It’s the same for athletes working out in the middle of summer,” he adds. “You have to be mindful of the heat and humidity.”

To protect yourself, both Tracy and Williams say hot yoga practicers need to pay close attention to their bodies. Feelings of lightheadedness, nausea, confusion, or muscle cramping—either during or after a yoga practice—are all signs that you need to take a break. That’s especially true for inexperienced yogis, whose bodies aren’t acclimated to the rigors of hot yoga, Tracy explains.

Williams also stresses the importance of hydration and nutrient replacement. “You can’t sweat out a bunch of minerals and then replace them with water alone,” he says. Dangerously low levels of potassium, sodium, and other electrolytes contribute to those scary health risks mentioned above. Left unanswered are questions about the long-term effects of hot yoga practice, or how people with heart defects or other health conditions might react to the strenuous conditions, Tracy says.

Sweaty bodies aside, most hot yoga fans also praise the activity’s mental and psychological benefits. And a growing pile of research on yoga suggests the practice—and not just the hot varieties—may help lower stress while improving pain management and emotion regulation in ways similar to meditation.

“This isn’t something we’ve studied directly, but I do think there’s an element of mindfulness in Bikram yoga instruction,” says Emily Lindsay, who researches stress and mindfulness meditation at Carnegie Mellon University. Focusing your attention on your breathing and body posture can anchor you in the present moment and foster mindfulness, Lindsay explains. Yoga practice can also provide moments of peace without interruption from your cell phone, email, or life’s other routine distractions. It’s not farfetched to think that these components could offer yoga practitioners some psychological benefits, Lindsay says. “Millions of people do it, and there aren’t just one or two anecdotal stories about how Bikram changes people’s lives,” Tracy says. “So there has to be something to it.” Hot yoga brings its own external heat source to heat up a room to around 100 degrees. But it’s important to mention that you produce your own internal heat when you exercise, and yes, you can consider yoga moderate exercise. Hot yoga uses static holds (and some flow), which means you are lengthening specific parts of the body depending on what pose you are in and then contracting other parts of the body to keep you stable, which means you are isometrically contracting the muscles that are keeping you stable.

How does your body produce its own internal heat? Several chemical reactions occur in the cells of the muscle tissue. These cells then release energy, which is in the form of heat. The rate of chemical reaction increases during muscle contraction thereby increasing internal heat of the body. This concept is important later on as we continue to talk about heat and its effects on the body.

Hot yoga pretty much gives you a heat-on-heat response, which can lead to heat exhaustion or even heat stroke. When internal heat rises, vasodilation occurs in the blood vessels in the skin and you begin to sweat to cool the body to keep the body within the normal range of body temperature. So you are sweating to cool the body down, you have an increase in blood flow, but the room is heated to over 100 degrees, therefore you have no way of actually cooling your body down, which can cause a disruption of internal body temperature.

In Hot Yoga when can things go wrong

The reason there is a disruption is because the body cools itself down in various ways, but the ones to focus on are conduction, convection, and evaporation. Conduction is exchange in heat with two objects in contact with each other, convection is exchange in heat between the body and air or water, and evaporation is the conversion of water from a liquid to a gas, a process that requires heat. When you are in the heated room, the reason it gets so humid is because several different bodies are sweating and the heat is trying to escape from the bodies because their internal temperatures are increasing.

So what happens when you are so hot in a hot yoga room, you can’t get out, and you begin to get sick? You may be starting to suffer from heat exhaustion. Your body keeps temperature homeostasis via a negative feedback system. This system is working during heat exhaustion, but in this scenario it can’t prevent an increase in body temperature above the normal level. This heavy sweating results in dehydration, decreased blood pressure, and increased heart rate. You may end up feeling weak, dizzy, and nauseated.

When feeling like this you must move into a cooler environment, but having been in many hot yoga studios, many yoga instructors either look down upon seeking relief or encourage students to stay in the room. If you ever have these symptoms you must get into an area of cooler temperatures to get the body back into homeostasis. If you don’t, it may lead to heat stroke that in most cases requires hospitalization.

Comments Off on Hot Yoga: Myths And Risks Unveiled