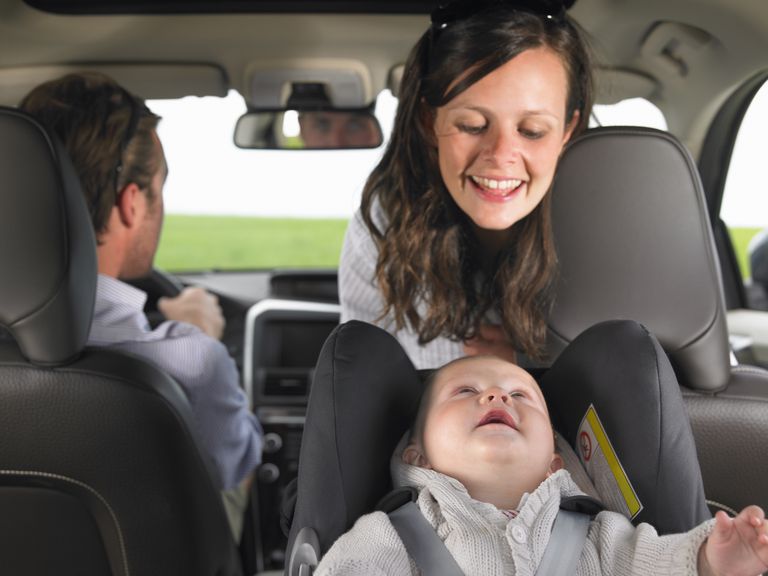 Riding rear-facing until at least age 2, and then beyond if possible, has big safety advantages that parents should strongly consider. In fact, the most recent study on this subject shows that toddlers are up to five times safer if they remain rear-facing until age 2.

Turning baby’s car seat around isn’t a milestone to rush on. It’s actually a step down in safety, so don’t be in a hurry to make the big switch!

You may have heard that babies can ride forward-facing at 1 year old or 20 pounds from many well-meaning sources. That’s the old standard, though. All children are safer if they remain in a rear-facing car seat beyond their first birthday. Thanks to higher rear-facing weight limits on car seats, nearly all toddlers can remain rear-facing to age 2 and beyond.

Some states in the U.S. have begun updating their child passenger safety laws to require rear-facing seats until age 2.

Lots of states still have laws that say your baby must be one year old to ride in a forward-facing car seat, and plenty of car seats also use that minimum standard. Seeing “1 year old” in print alongside “forward facing car seat” leads many families to believe it is safe for their little one to switch to forward facing far too young.

New parents also naturally turn to their family and friends with parenting experience when it comes to car seat safety advice. If your family and friends are a few years out from having newborns and toddlers, though, it’s possible, and even likely, that their car seat advice is outdated.

According to a report in the April 2011 edition of Pediatrics, the bones and ligaments of a young baby’s spine can stretch up to 2 inches, while the spinal cord itself can only stretch about 1/4 inch. That means if the spine is forced to stretch in a crash, the spinal cord is at risk of breaking, leaving the baby with brain damage or paralysis.

The incidence of severe head and neck injuries for babies and toddlers is greatly reduced in rear-facing car seats.

My Baby Wants to Be Forward-Facing!

Even if your baby’s legs are touching the seat back, or the baby cries when rear-facing, you should still keep baby rear-facing until he or she reaches the rear-facing weight or height limit of the car seat. Most convertible car seats have rear-facing weight limits of 35-40 pounds now, so you should be able to keep your toddler rear-facing to age 2, if not longer. Some children never like sitting in a car seat, and they may cry. However, being properly restrained makes it more likely that a baby or toddler will survive a crash to cry another day.

Many parents worry that their baby will suffer broken legs in a crash because baby’s legs touch the seat back or look cramped when rear-facing. It’s important to remember, though, that in a crash severe enough to break baby’s legs, there would also be enough force to cause severe neck injuries if your baby or toddler was forward-facing. While it’s never fun to choose between injuries, the chance of full recovery is greater for broken legs than broken necks. Similarly, if your baby fusses while in a rear-facing car seat, it may seem easy to turn baby around to keep him or her happy. Again, though, you’re choosing between a fussing baby or the chance of severe head, neck and spine injuries.

When babies turn 1, many parents think about moving past the rear-facing only infant car seat with the carrier handle. There are lots of options if you need a new car seat for a 1-year-old! Remember, car seat safety advocates recommend that babies stay in a rear-facing car seat to the weight limit of the seat or at least until age 2, so you’ll want to find a car seat that can work both rear-facing and forward-facing. Look for a convertible car seat with a high rear-facing weight limit and tall shell, and then use it rear-facing as long as possible.

Several car seats today have rear-facing weight limits up to 50 pounds, which should accommodate the average child through age 4 and maybe beyond. You should also check the manufacturer’s rear-facing height limit to be sure your baby is not too tall to safely stay rear-facing to the weight limit.

Most toddlers should be able to remain rear-facing far beyond age 2.

Why would you want to keep your child rear-facing? Crash data shows us that anybody is safer in a crash when riding rear-facing for the reasons outlined above. Even though your baby’s neck may now be strong enough to withstand some types of forward-facing crash forces, he or she is still better protected in a rear-facing car seat because that seat still distributes the force over a greater body area and still gives better support to their young head and neck.

A rear-facing car seat offers the best protection for babies and toddlers and should be properly used for as long as possible, to the limits of the car seat. It is no longer recommended to turn your baby around immediately at one year and 20 pounds. A 2007 study in the Journal of Injury Prevention showed that rear-facing toddlers under age 2 are 75 percent less likely to die or be seriously injured in a crash. According to NHTSA, a rear-facing car seat is 71 percent safer than no restraint at all, and a forward-facing car seat is 54 percent safer than no restraint at all. Keeping your baby rear-facing to the limit of the seat is the safest choice. You can check your car seat instruction book or the labels on the car seat sides to find the rear-facing weight and height limits.