How to Check Your Cervical Mucus 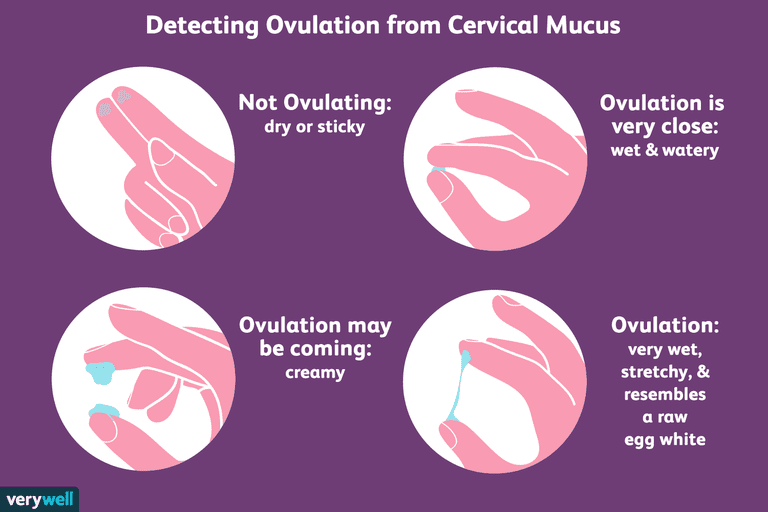 Cervical mucus is secreted by glands found in and around the cervix. Hormonal changes throughout a woman’s reproductive cycle change the amount and consistency of this mucus. Cervical mucus may also be called cervical fluids.

The job of cervical mucus is to either:

Fertile cervical mucus is a clue that ovulation is coming. Your vaginal discharge is fertile when it resembles raw egg whites. This is the best time to have sex if you want to get pregnant.

You can predict this by checking and tracking cervical mucus changes. Yes, this will mean looking and (usually) touching your vaginal discharge. You may feel squeamish about it, but it’s your body. Knowing how your body works can be empowering. You learn to become aware of where you are in your cycle and when you’re about to ovulate. It truly becomes second nature!

Understanding the Connection Between Ovulation and Cervical Mucus

Your BBT will tell you if and when you ovulated after it happened. But if you want to get pregnant, you need to have sex before ovulation. Cervical mucus changes can tell you before you ovulate. This information can actually help you time sex for pregnancy.

Just before ovulation occurs, the hormone estrogen leads to increased cervical mucus and changes it into a stretchy, viscous-like substance. This helps sperm survive and swim.

After ovulation, the hormone progesterone causes cervical mucus to become sticky and thick. This stops sperm (and any other foreign substance) from getting through to the uterus.

As ovulation approaches, your cervical mucus changes from a consistency that’s not sperm-friendly to a more fertile variety. While everyone’s body is different, the general changes that cervical mucus goes through are:

When your cervical mucus is in the wet or raw egg white consistency stage, ovulation is approaching. This is the best time to have sex if you want to get pregnant.

How to Check Your Cervical Mucus

1. First, wash and dry your hands.

2. Find a comfortable position, either by sitting on the toilet, squatting, or standing up and putting one leg up on the bathtub edge or toilet seat.

3. Reach one finger inside your vagina; your index or middle finger is probably best. (Be careful not to scratch yourself.) Depending on how much cervical mucus you’re producing, you may not need to reach so far, but getting a sample from near your cervix is ideal.

4. Remove your finger from your vagina and observe the consistency of whatever mucus you find.
Do this by both looking at the mucus and rolling what you find between two fingers (usually your thumb and index finger). Try pressing your fingers together and then slowly moving them apart.

5. If you are charting your BBT, you should mark down on your chart your cervical mucus findings. Abbreviations often used are S for sticky, C for creamy, W for wet, and EW (or EWCM) for egg-white cervical mucus.

Don’t check your cervical mucus during or right after sex.

Also, avoid checking when you’re feeling sexually aroused. Arousal fluids are not the same as fertile cervical mucus, but you probably won’t be able to tell the difference. Checking after sex is also a bad idea because it’s too easy to confuse semen with cervical secretions.

You can check your cervical mucus by looking at the toilet paper or your underwear.

Not everyone is comfortable with putting their finger inside to check themselves. But you don’t have to. You can instead pay attention to how wet your vulva feels on a day-to-day basis, pay attention to the discharge on your underwear, or look at the toilet paper after urination. There is, in fact, an entire method based on this: the Billings Ovulation Method. With all that said, however, it’s easier for many women to physically check themselves and reach inside.

Of course, first, wash your hands well! But if you have trouble finding cervical mucus, it may be easier after a bowel movement.

Having a bowel movement moves down any vaginal discharge closer to the entrance of your vagina.

If you have multiple patches of fertile cervical mucus, look for additional ovulation signs besides CM.

You should consider paying attention to other ovulation signs, like cervical position changes. You may also want to chart your basal body temperature, so you know which (if any) of the fertile cervical fluids indicated ovulation.

Some medication may interfere with your cervical fluids.

Antihistamines dry up more than your sinuses—they also dry up your cervical fluids. Ironically, Clomid can prevent you from having fertile quality cervical mucus. In this case, you might not find as much fertile cervical mucus before ovulation. So, you might want to try using an ovulation predictor kit to detect ovulation instead.

If you never get fertile quality cervical mucus, tell your doctor.

Lacking fertile quality cervical mucus can be a sign of a hormonal imbalance or fertility problem. Cervical mucus that doesn’t ever become fertile is sometimes referred to as hostile cervical mucus.

You may see fertile cervical mucus again right before your period.

Some women notice that their cervical mucus becomes wet or almost egg white-like again right before menstruation. Obviously, this isn’t a sign of impending ovulation. Women sometimes wonder if getting a lot of cervical mucus just before their period is a possible early pregnancy sign.

The fact of the matter is, it’s almost impossible to tell the difference between “early pregnancy” cervical mucus and regular “just before your period comes” cervical mucus.

You may confuse semen with cervical mucus.

A day or two after sexual intercourse, you may confuse semen with wet cervical mucus. With experience, you can learn how to differentiate the two, but for the purposes of getting pregnant, assume that you may be approaching ovulation and mark your calendar or chart accordingly.

Do not attempt to wash away your natural vaginal fluids!

Cervical mucus is normal and healthy. Some women wash away “ovulation secretions” thinking they are unhygienic or unhealthy, but douching can decrease your fertility.

Dehydration won’t help your trying-to-conceive efforts. If you’re not drinking enough water, your mucous membranes (which include the cervical area) won’t be as moist. Your body will reserve the water it has for the most vital body functions.

Some say that vitamin E supplements can improve cervical mucus quality. However, if you are taking any blood thinners (including daily baby aspirin), you shouldn’t take vitamin E. The amino acid L-arginine is also said to possibly help with increased cervical mucus, by increasing blood flow and circulation by the reproductive organs.

It’s also been said that grapefruit juice and green tea may improve cervical mucus quality, but there are currently no clinical studies backing up either of these claims. Do be aware that some prescription drugs can’t be mixed with grapefruit juice.

Before you start any supplements, talk to your doctor. Always tell your fertility doctor about any herbal or “natural” remedies, because some can interact with fertility drugs.

Tracking your cervical mucus changes is a free and easy way to detect ovulation and get to know your fertility cycle better. There’s a bit of a learning curve, and it may take a few months before you learn to recognize the various changes in your vaginal discharge. But once you get the hang of things, you’ll have gained a powerful tool for your trying-to-conceive toolkit.

Comments Off on How to Check Your Cervical Mucus fertility & conception