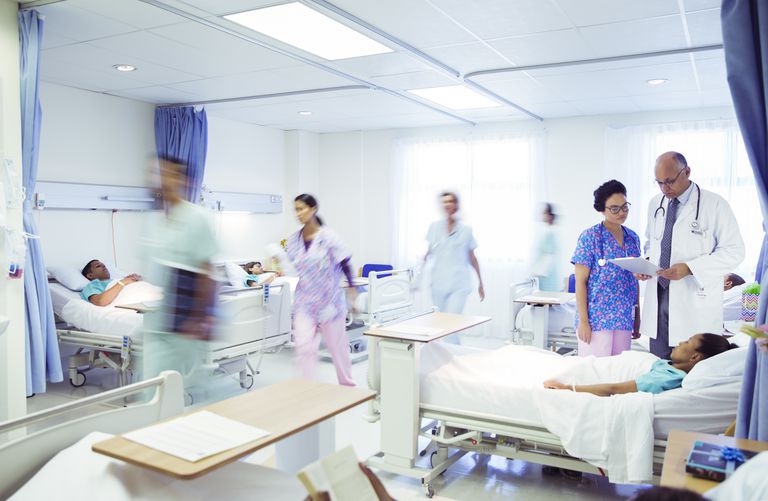 It seems when one kid is sick at home, everyone gets sick. But in the hospital, it’s not just one patient who is sick. It might be hundreds of patients. Yet, the doctors and nurses who take care of them don’t get sick. They don’t suit up like they’re going to the moon, but they still usually avoid getting sick. How come?

There are very simple rules that nurses, doctors, and others follow to keep themselves safe in hospitals. Otherwise, infections could spread fast in hospitals and hospitals would be places where people got sick, not better.

The simplest rule is:

Washing your hands before and after every patient contact.

There are other rules specifically for nurses and doctors to protect themselves from other diseases.

What protection is needed depends on what they are being exposed to — what parts of the body and what body fluids. Protection also depends on what symptoms or diseases a patient has. How we protect ourselves from a sneeze is different from an itchy skin infection.

These rules need to be followed even before a diagnosis is made. Symptoms or suspicion of a disease should trigger precautions. No one should wait for a definitive diagnosis to take precautions and be safe.

For some diseases, more than one rule applies. A virus that causes the cold can be caught from a sneeze or a handshake. Two forms of precaution may be needed.

The four sets of Precautions that keep us safe in hospitals:

All patients should be treated as if they have a bloodborne infection even if they don’t and we’ve tested them. No one should come into bare contact with blood. No one should come in contact with other infectious body fluids, which include: cerebrospinal fluid (CSF) from a lumbar puncture, fluid from joints, lungs, hearts, abdomens (peritoneal space), as well as vaginal secretions, semen, and amniotic fluid during childbirth). Gloves should always be worn for any procedures or exams that may involve blood or these fluids, such as drawing blood, inserting an IV, doing a lumbar puncture. If there is a risk of fluids splashing, there should be eye protection and a mask, as well as gowns if needed (such as for birth).

For anyone with symptoms that might be spread by contact. This includes patients with diarrhea, especially if known to be caused by Clostridium difficile, norovirus, and rotavirus. This also includes patients with some skin infections, especially lice and scabies. This can also include some respiratory viruses, like enterovirus and adenovirus, which can spread by sneeze or touch to tabletops, doorknobs, and other objects, which we call fomites (objects that can transfer infections).

For infections spread by droplets propelled often by coughing and sneezing (from germs in the nose and sinus down to the lungs).

These precautions cover patients with, or with signs or symptoms of influenza, other respiratory viruses (parainfluenza virus, adenovirus, respiratory syncytial virus [RSV], human metapneumovirus, mumps) and bacteria (whooping cough or pertussis). Other patients with Neisseria meningitides, group A streptococcus—need these precautions for the first 24 hours of treatment.

These precautions are needed for tiny germs that cluster in tiny little dollops that let them float in the air. These little dollops, called nuclei, usually come out when breathing (coughing, sneezing, or talking) and can across distances beyond what a simple sneeze can propel germs. Very few infectious germs can do this. Only chickenpox (until lesions crust) or herpes zoster (shingles) in an immunocompromised person or disseminated, measles, and tuberculosis (TB) are generally found in hospitals.

These nuclei are much like droplets, but just tinier. They are normally less than 5 microns—or 1/200th of a millimeter. Sometimes, however, they can be a bit larger. The smaller the nuclei, the deeper the disease can reach down into the lungs.

When healthcare providers do procedures that can create a mist fine droplets of infectious material—such as intubating an influenza patient—they may use airborne precaution masks, as well as goggles to protect themselves, even when influenza is spread largely through droplets that are not aerosolized. The CDC also had recommended special masks be used for H1N1 in 2009.

Other infections may be spread in different ways. Some may require multiple forms of protection. Enterovirus requires droplet and contact precautions; Ebola does as well, but it also needs more extensive and fool-proof contact precautions.

Still, other diseases may spread by means not associated with direct patient care.