Tired of using lettuce leaves as a tortilla replacement? This keto tortillas recipe is for YOU! It’s quick; it’s easy and surprisingly nutritious! The carb count is negligible; it’s low in calories and protein-packed. For diet-friendly replacement food, these low carb tortillas are tough to beat. I’m uber excited to share these pliable beauties! The next time you’re jonesin’ for tortillas, I hope you give this recipe a try instead of swinging by a taco truck for an impromptu dietary downward spiral. ?

Don’t forget to PIN it for later! ? 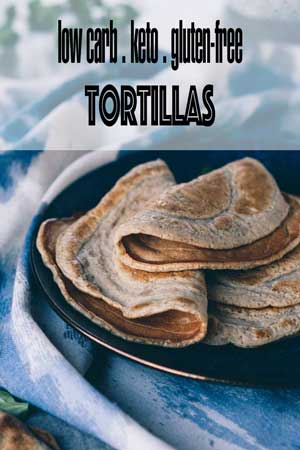 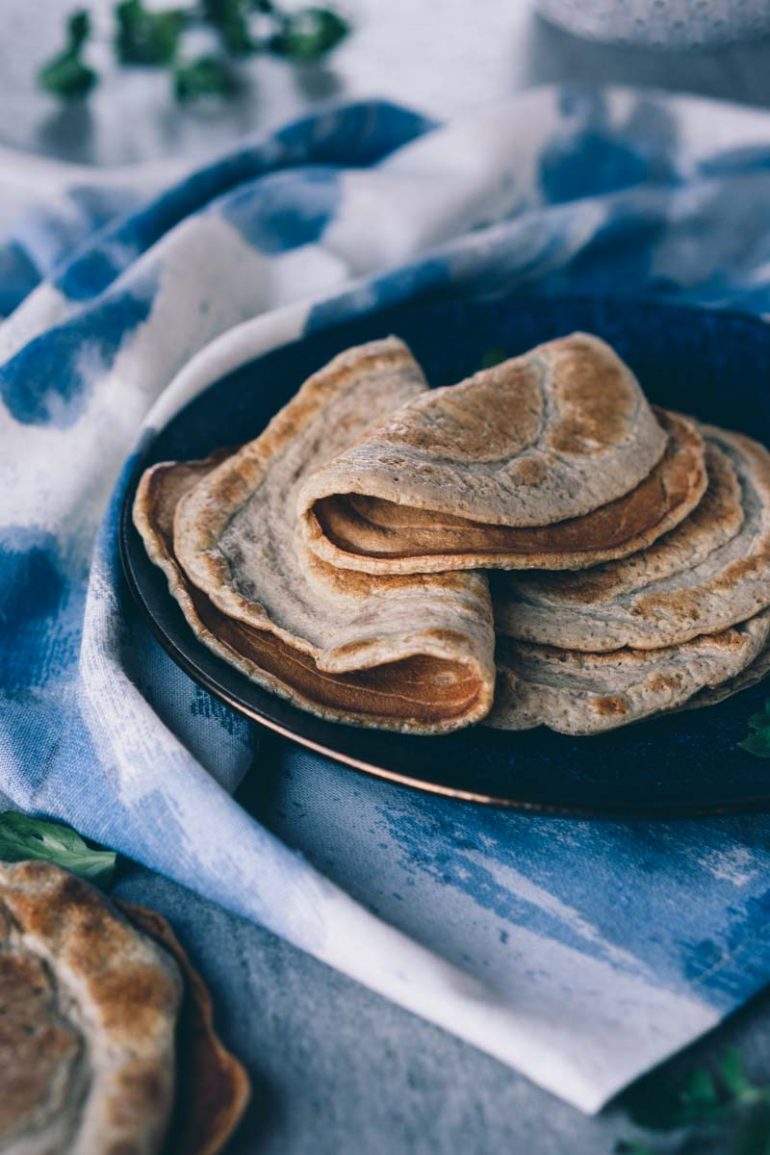 As far as tortillas are concerned, this recipe is as close to zero carbs as you are going to get. Most of the carb content in this keto tortillas recipe is from dietary fiber. Once you subtract the fiber, you’re looking at only one net carb per serving! That means each tortilla is roughly just 0.25g net carb.

The carbs are coming from psyllium husk powder, nutritional yeast, and eggs. Since most of us know what an egg is, let’s talk about the other two.

Psyllium husk powder is commonly used in low carb baking and bread recipes. Since it is entirely fiber, we can discount these carbs from the total carb count. In addition to being the star of low carb versions of the goodies we all know and love, it’s often used as a dietary supplement to aid digestion and lower cholesterol.

Nutritional yeast is an excellent source of fiber as well, but the protein it provides may be of more interest (especially if you are a vegetarian keto dieter). All 9 essential amino acids are supplied in nutritional yeast, making it a complete protein source. It also has loads of B vitamins and a variety of different minerals. Not too shabby! 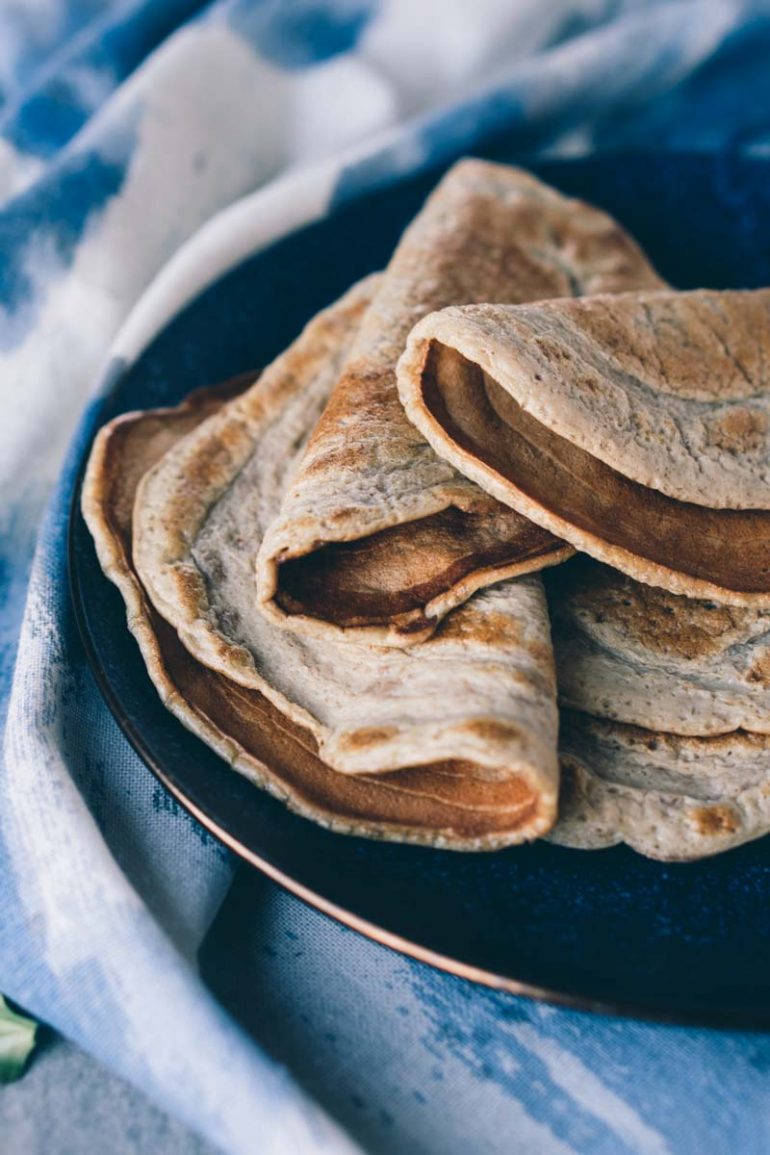 Okie dokie, here’s the deal. The keto tortillas recipe is ridiculously easy to throw together. It’s a matter of simply measuring the ingredients out, whisking them together nice-n-good, then cooking in an unquestionably non-stick pan. The recipe is foolproof with the right tools, but if you aren’t working with a high-quality non-stick surface, you’re going to struggle. If this is the case, my suggestion would be to lock down a solid non-stick pan asap. Game. Changer.

If you’re going to make do with what you have, you’ll need to oil the surface pretty well, and it still might be a challenging flip. But I warned you!

Once you’ve got your trusty non-stick pan to work with, place it on the burner over low-medium heat while whipping up the ingredients. You’ll need a couple of eggs, some egg whites, psyllium husk powder, nutritional yeast, baking powder, and salt. Whisk these all together until the lumps disappear, let it sit briefly, then whisk it once more for good measure to take care of any separation before cooking.

If you don’t have nutritional yeast but still want to give this recipe a go, just double the amount of psyllium husk used. You won’t get all the extra nutrients in your keto tortillas, but it will still result in a pretty tasty low carb tortilla nonetheless. I’ve tried lots of combos and ratios, so far this has been my favorite preparation… but feel free to experiment with what you have on hand!

Each tortilla will require two tablespoons (30 mL) of batter. Carefully measured out, this recipe will give you eight tortillas. You can eyeball this measurement or purposefully use larger (or smaller) quantities to adjust the size. Just be aware of how the nutritional data may be affected by your changes if you are tracking.

To cook the tortillas, I like to drizzle the batter on the hot pan to create a circular border, then fill in the inside area. This practice helps to create circle shapes instead of the abstract blobs that tend to form when you let the batter spread all willy nilly. I aim for a circle about 4 to 5 inches in diameter and use a utensil to spread the mixture thinly as needed.

Once the batter is shaped to your liking, cover the pan. You want the tortilla batter on top to solidify a bit before trying to flip it, which usually takes less than a minute. Flip the tortilla and cook uncovered for just a tad bit longer, 30 seconds tops. Remove the tortilla and set aside to cool until you’re ready to chow down. Repeat until all the batter is used up!

If making ahead of time, store the tortillas in a zipper-lock bag in the refrigerator until it’s time to feast. Enjoy! 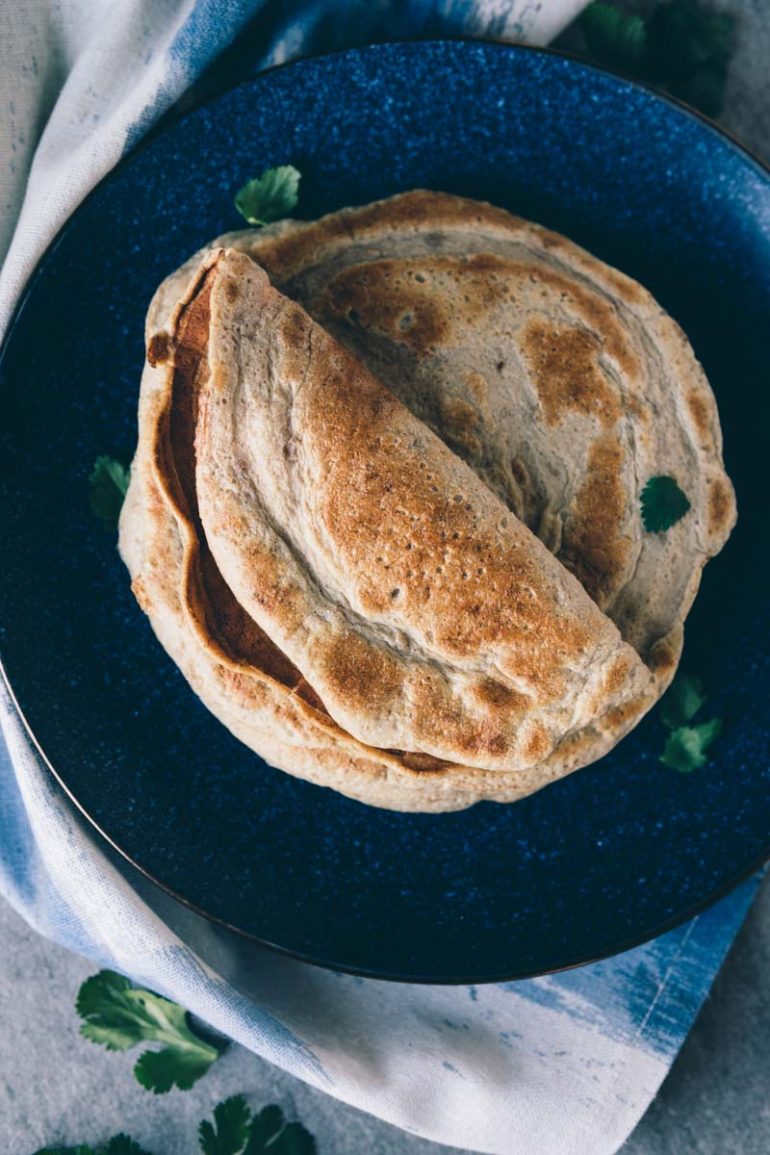 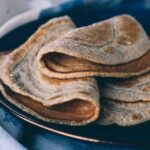 One serving is 4 tortillas made per recipe instructions and totals 1g net carb.