An obese mother has got revenge on a cruel ex-boyfriend who bullied her because of her weight by losing more than 130lbs.

Alvina Rayne’s bullying former partner called her a ‘fat piece of garbage’ when she reached her heaviest at 274lbs (20 stone) but he tried to get back together with her after she ‘put on some hotness’.

To cope with his nasty comments, Alvina, 32, ate 5,000 calories a day – including two fast food meals, two bowls of sugary cereal and snacks throughout the day. 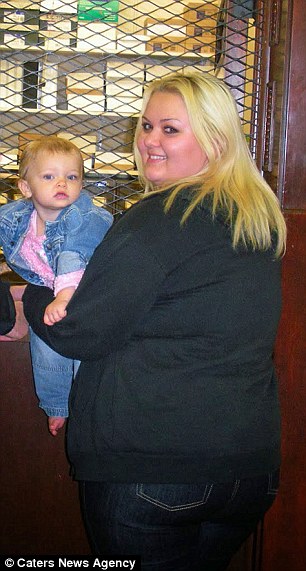 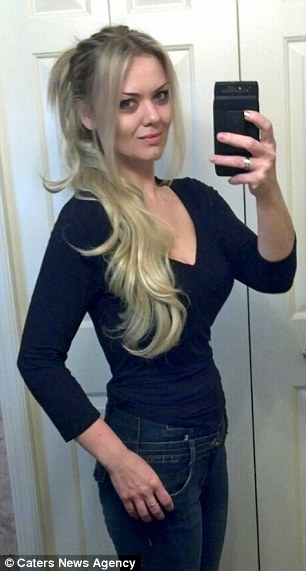 The mother-of-two was so heavy that she was forced to buy men’s clothes because women’s items would not fit her.

But in 2009, Alvina, from Philadelphia in Pennsylvania, decided to end her unhealthy relationship with food and ditch her partner.

She switched to a low-carbohydrate ketogenic diet and lost a whopping 130lbs to prove him wrong.

Now she’s had the last laugh by finding love again with her husband Sascha, 32.

Alvina said: ‘I remember my ex telling me that if I left him “no one would want me” and that I was “worthless, ugly and would never lose the weight even if I tried.”

‘He used to say I was an “ugly, fat piece of garbage” and lots of other vile things. 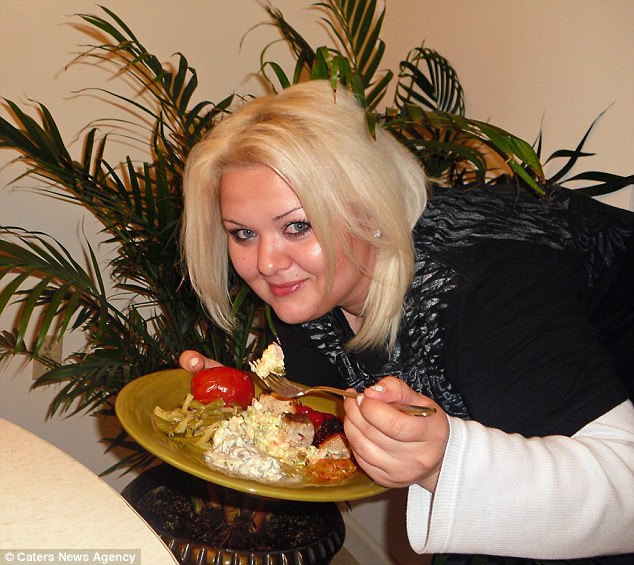 Alvina Rayne’s bullying former partner called her a ‘fat piece of garbage’ when she reached her heaviest at 280lbs.

‘After years of putting up with the abuse and being isolated from everyone by him, something had to change and it got to a point where I finally told him to get out of my life, forever.

The video blogger added: ‘I switched to a low-carb keto diet, sticking to 75 per cent healthy fats, 20 per cent protein and 5 per cent carbs and quickly started to lose a lot of weight.

‘Whenever I was struggling, I would remember him telling me “no one will want you” which made me even more determined to prove him wrong.

‘After losing the weight I saw my ex’s mom and she was shocked at my transformation and she told him how much I had changed.’

‘Later my ex called to tell me “I heard you put on some hotness” and tried to get me back. 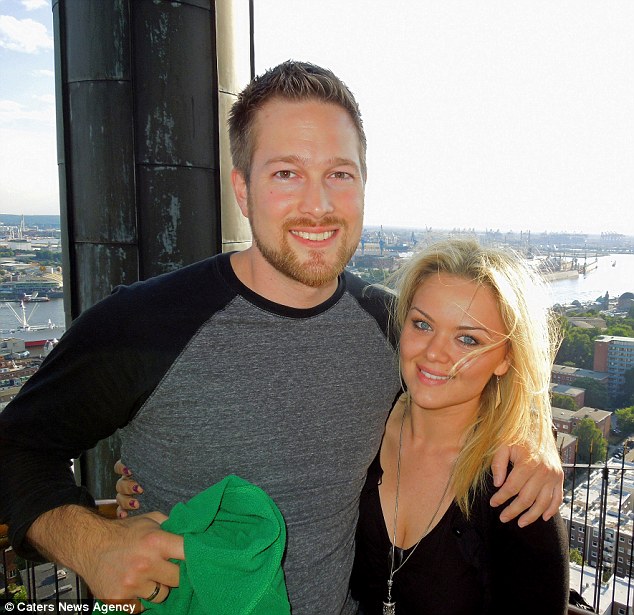 Now she’s had the last laugh, by finding love again with her husband Sascha (left), 32

‘But there’s no way that would ever happen, I’m happier than I’ve ever been in my life and don’t want anything to do with him ever again.

‘Now I’m happily married to a man who treats me like gold and loves me.’

At her heaviest, Alvina’s unhealthy lifestyle left her with a body mass index of 42.9 – putting her into the very severely obese category.

She would get out of breath walking and struggled to fit into women’s clothing, forcing her to wear men’s clothes. 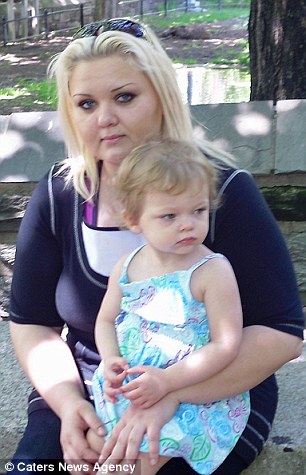 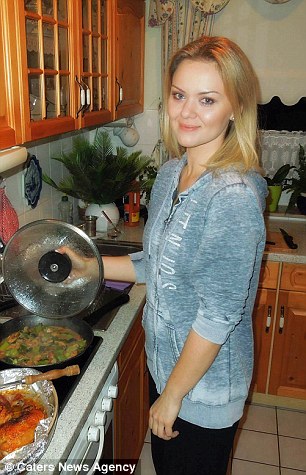 Alvina switched to a keto diet, cut out her sugary snacks and takeaway meals to lose weight

Alvina said: ‘I almost never let my stomach feel hungry, I ate until I was stuffed, the only time I felt comfort was when my stomach was very full.’

‘I had a yearlong affair with Taco-Bell when I was pregnant, where I’d sometimes have it twice in a day. I would have Chicken Chalupas, Quesadillas with extra cheese and temporarily I would be content.

‘I would often eat all the way up until bedtime and sometimes in the middle of the night I’d have two bowls of cereal or some M&Ms.’

‘I was so overweight that I would get out of breath after climbing one flight of stairs. 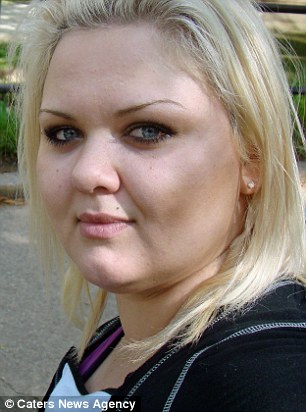 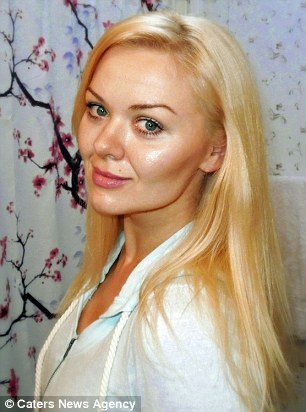 Alvina said: ‘I almost never let my stomach feel hungry, I ate until I was stuffed, the only time I felt comfort was when my stomach was very full’ 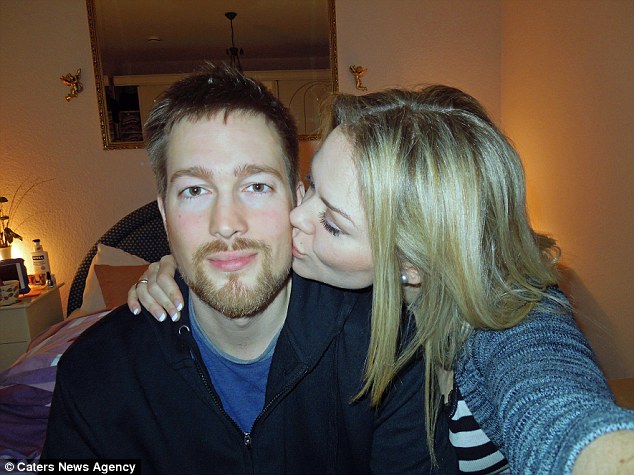 She added: ‘I was so overweight that I would get out of breath after climbing one flight of stairs’

‘When I was shopping I had to get things from the men’s department because the women’s cut was so bad and nothing fit right.

‘I had more men’s clothing than women’s, I would wear my ex’s clothes or buy men’s t-shirts and sweat pants.’

She switched to a keto diet, cut out her sugary snacks and takeaway meals.

Now she weighs 140lbs, she helps others to lose weight online.

She says that the diet has even helped to reverse a list of her health problems that were linked to obesity. 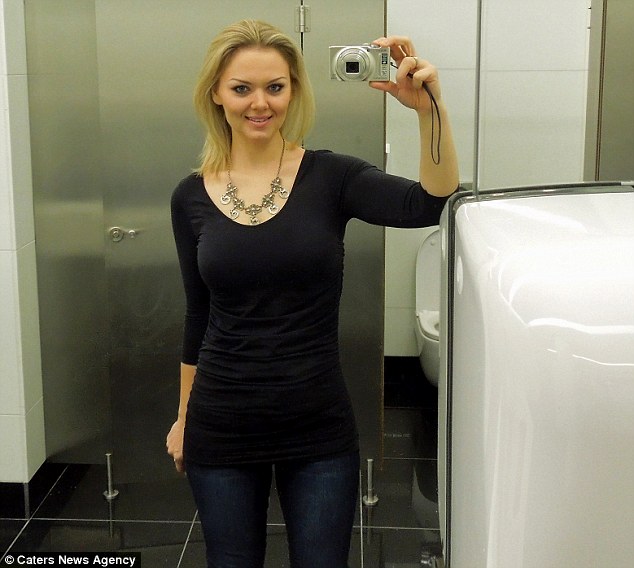 Now she weighs 130lbs (9st 4lbs), she helps others to lose weight online with her video blogs

‘Now they are all gone after nearly 7 years of keto which makes me feel great.

‘Now I want to use my YouTube channel to give people hope that no matter what’s happened to them in the past, they can have a new future.

‘I want others to know that they can start their life completely over, you don’t have to stay where you are, it’s so powerful to realize that you are in control of your body and life.’