Heard of orbiting dating or have you already experienced this new dating trend? Find out what these terms and trends mean to your romantic life over 40. 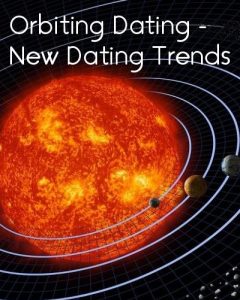 What Is Orbiting Dating?

OK, you meet this great guy and things go well for a while. You add each other on Facebook, Instagram etc. which is natural enough. But sadly, something shifts and before you know it, you’re not seeing each other anymore. Often this happens early on, before you’ve even become a couple, so there’s not even a breakup.

Maybe he disappeared suddenly and you never heard from him again for what seems like no reason at all. Or he slowly drifted away. Either way, the curious thing is that he still follows you closely on social media and may even like and comment on your posts and stories.

Yet, if you text him, he probably won’t respond. Social media is the extent of his interest. This is the heart of orbiting dating.

What the heck is this about? Why would a man who doesn’t want to spend time with you, orbit your social media posts, watching so closely? This makes no sense and for many women becomes highly frustrating. Sometimes a man will keep looking at your stories for months.

You might be surprised, but this kind of behavior has gotten so common that Anna Iovine, writer from Manrepeller, coined the term “orbiting” recently in 2018. Simply put, orbiting dating refers to someone who keeps you in his “orbit” or life, but only to watch or track. She pointed out that this is not the same as ghosting – the behavior takes on a new twist.

Ghosting is when a man exits your life, disappearing like a ghost into the ethers. The dating term was added to the Urban dictionary in 2006, so the phenomenon has been around for a while. The dating trend of ghosting has become part of everyday language so that pretty much everyone knows now what ghosting means.

However, ghosting differs from orbiting dating, since you know the guy is still around seeing his social media activity.

There is certainly a voyeuristic aspect to orbiting dating, with a curiosity that gets satisfied by keeping track of you. A comment here and there might pique your interest and fool you into thinking he’s coming around again. Nope, don’t get sucked in or believe it.  Sure, he might be interested from a distance, but this is not the behavior of a man who is serious about you.

Why Is He Orbiting You?

This is a really good question and there are a number of reasons that might be the root cause of this strange behavior. Here are my top five best guesses:

Since this post is all about new dating trends, let’s talk about breadcrumbing. This is different than ghosting or orbiting dating, because the man is still in the picture to some degree. But he’s only feeding you little crumbs of attention.

Breadcrumbing means you are with a man who won’t spend quality time with you. He shares very little of himself and hopes to keep you interested with mere crumbs of his attention, hoping that will satisfy you.

Why choose to breadcrumb you? It’s a bit like orbiting dating. He isn’t ready for or doesn’t want a real relationship, he’s a player with multiple women, or he’s lacking in emotional IQ.

How To Stop Breadcrumbing

Most self-respecting women will not put up with this for long which is wise. Once a man starts breadcrumbing, there’s no returning the relationship to the glory of what it once was. You are on an irrevocable downhill slide that is only corrected when you END IT.  Walk away with your dignity and head held high to find love with a better man.

The most important take away about orbiting dating, breadcrumbing and ghosting is this – these are not really new ways for men to treat you poorly. There have always been men who don’t treat women respectfully or cherish them as the joy of their life.  This is NOT new. Maybe the method is new via social media stalking, but the meaning of the behavior is not.

Any man who disappears, runs hot and cold, parcels out his attention or will only text or view social media – all of this adds up to the EXACT SAME THING – he’s NOT the man for you!

You deserve better. You deserve true love and the whole shebang with a man who treats you like gold and knows how lucky he is that you are in his life.

If the man you are dating doesn’t act this way, that automatically makes him the WRONG MAN. Unless you don’t mind substandard treatment and a lack of respect…

The best thing you can do if you continually run into men who fall into any of these three dating trends is to walk away.  Respect yourself enough to not let men take advantage of you. Love yourself enough to know you deserve the real thing.

All love starts with self-love. So, if you think that this crummy guy is the best you can do, that’s where you are wrong. Time to look within and ask yourself how you can love yourself more. Most often, you’ll have to be there for yourself and take care of yourself to move on and find love again.

Here’s what is so amazing about self respect and self love: The more you love yourself and refused to put up with poor treatment, the better the quality of the men you’ll attract. I’m not kidding. This is how it works. Self -love, ATTRACTS real love.

Kick Him Out Of Orbit!

While you can’t stop a man from following you on social media, you don’t have to let it bother you. Unfriend and hide their posts when possible. Don’t give his ridiculous behavior any of your energy or thought. Don’t bother with it, respond to him or talk about him.

This way of handling orbiting dating will keep your energy free, so you can move on to find a better man. A man who wants to spend time with you and cherishes how you light up his life.  He’s OUT THERE. But you’ll only find him if you aren’t all tangled up with some idiot who can’t or won’t deliver the love you want.

Believe in yourself and true love and you will find it. That’s one dating trend that has never varied or changed one bit. People fall in love every day. You could be next so don’t give up!

If you want to discover what’s holding you back from the love you deserve, schedule a complimentary 45-minute call with me and let’s figure out how to get you moving on the right path. Let 2019 be your year for love!

Comments Off on Orbiting, Breadcrumbing, And Ghosting Oh My! New Dating Trend dating