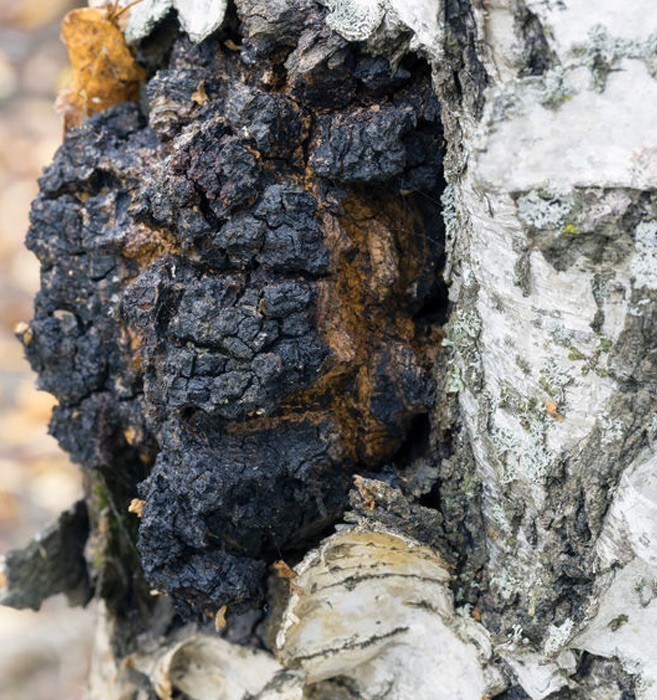 Siberian Mushroom (Inonotus Obliquus) is a mushroom that typically grows on birch trees in colder climates across the Northern Hemisphere. At first glance, the mushroom doesn’t look very appealing; actually, it doesn’t even looks like a mushroom at all! Appearances can be deceiving, however, as this special mushroom packs a punch when it comes to its health value.

What Is Siberian Chaga Mushroom?

Chaga has been consumed for centuries in the East, most typically as tea, where its health benefits are well established. More recently, chaga has been gaining popularity in the West, where its numerous health benefits are now being recognized by many health gurus. Technically, chaga is a highly-concentrated black mass of mycelium that protrudes from birch trees infected with parasitic–but non-toxic–fungus Inonotus Obliquus. The dark, hard and cracked exterior, which often appears like burnt charcoal, is called the sclerotium. The interior has a rusty yellow brown color.

What Are the Benefits of Siberian Chaga Mushrooms?

The health benefits of Chaga are numerous, many of which can be attributed to its immune-boosting ingredients and antioxidants.  Let’s go through each of the top 6 health benefits:

Chaga has an abundance of Beta-D-Glucans which help balance the response of the body’s immune system. This means that chaga helps boosts the immune system when necessary, but slows it down when it’s overactive. This makes chaga a natural Biological Response Modifier (BRM). Research has also shown that chaga activates immune cells responsible for combating cancer initiation. Research is still ongoing, as more studies are needed to determine chaga’s full role in cancer. Chaga has proven effective in supporting standard cancer approaches, such as chemotherapy, by compensating for the program’s negative side effects. I’m certainly not saying that chaga will ease cancer progression; however, evidence suggests there may be vital compounds in the mushroom that warrant further investigation into its role.

Chaga supports the integrity of blood vessels and provides soothing properties in times of irritation. This can be helpful for those suffering from pain, neuropathy, and even diabetes.

Due to its immune-boosting properties, chaga has long been used to support gastrointestinal health in Eastern culture. Most ulcers are caused by bacteria such as Helicobacter pylori, so a well-functioning immune system can fight off this pathogen. Ulcers may be soothed by the use of chaga, depending on the severity and the patient.

Studies have shown that the betulinic acid found in chaga is able to break down LDL cholesterol–bad cholesterol–in the bloodstream.

In one study, the chemical characterization and biological activity of extracts of Chaga mushroom were examined and showed high antioxidant and antimicrobial activity.

In one study, cells were pretreated with a chaga mushroom extract, then treated with H202 to induce oxidative stress. The pretreated cells displayed less damage than cells that did not receive the chaga extract.

A limited amount of studies have been done to learn about the antiviral activity of chaga mushroom. In two recent studies, chaga mushroom showed protective support against harsh skin blemishes.

Comments Off on Siberian Mushroom