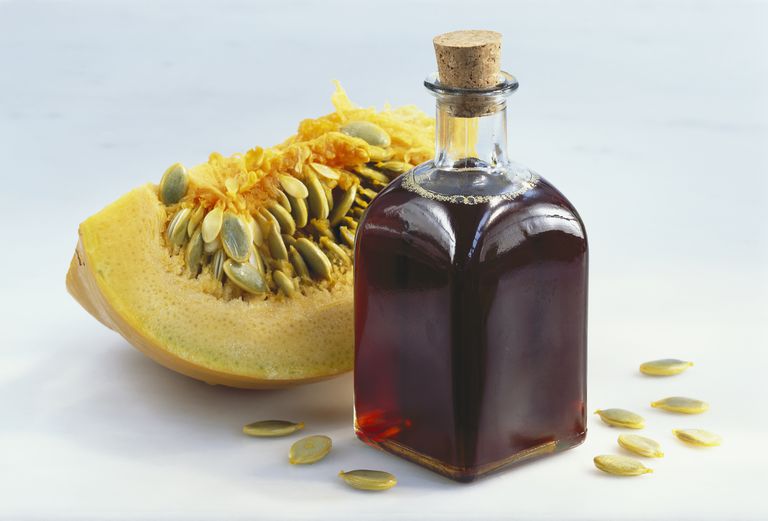 Pumpkin seed oil contains phytosterols, which are structurally similar to the body’s cholesterol. Phytosterols compete with cholesterol for absorption in the digestive system, which can block cholesterol absorption and lower cholesterol levels, according to the Cleveland Clinic.

A study published in Evidence-based Complementary and Alternative Medicine found that when men took 400 milligrams of pumpkin seed oil per day (in capsule form) for 24 weeks, they saw an increase in hair growth.

While this study was funded by a private company, the study authors reported no conflict of interest.

A pilot study conducted on 35 menopausal women found that those who took pumpkin seed oil (rather than wheat germ oil) experienced increases in HDL cholesterol, a decrease in diastolic blood pressure, and fewer menopausal symptoms such as hot flashes, headaches, and joint pain.

Study authors suggested that more research is needed to confirm their results.

A study published in the Journal of Traditional and Complementary Medicinefound that when study participants consumed pumpkin seed oil as an extract for 12 weeks, they found relief from overactive bladder symptoms.

A study published in the Journal of the Science of Food and Agriculture examined the use of pumpkin seed oil on metabolic disease in rats. Scientists found that pumpkin seed oil may be helpful in the prevention or treatment of metabolic disorder in rats who were fed a high-fat diet. However, rodent studies don’t provide strong evidence that humans will experience the same benefit. These studies simply offer clues to researchers so that further studies can be developed.

A study published in the Journal of Medicinal Food found that pumpkin seed oil may have the potential to lower blood pressure and provide other benefits to prevent heart disease. This study was also performed on rats, so it is unclear whether humans would experience these same benefits.​

However, women who are pregnant or breastfeeding are advised to avoid using the product in amounts greater than those found in food because there is not enough evidence to supports its safety.

Pumpkin seed oil is also available as a cooking oil that can be used in a variety of different recipes, including salad dressing, marinades, and toppings. Some even recommend pouring a small amount of pumpkin seed oil over ice cream—its nutty flavor makes a tasty treat.

Pumpkin seed oil has a smoke point of 320F or lower and should not be used for frying, sautéing, stir-frying, or other forms of cooking with heat.

A typical serving of pumpkin seed oil is 2 teaspoons, which has 80 calories and 9 grams of fat. Most of the fat in pumpkin seed oil is polyunsaturated fat, specifically omega-3 and omega-6 fatty acids. Research has shown that these essential fatty acids can help lower your LDL (bad) cholesterol and prevent cardiovascular disease.

You’ll also get a small amount of monounsaturated fat when you consume pumpkin seed oil. Monounsaturated fats are considered good fats because they can help boost your HDL or “good” cholesterol levels.

When purchasing pumpkin seed oil for cooking or as a supplement, choose cold-pressed oil. This means the oil has been extracted out of the pumpkin seeds using pressure rather than heat. This retains more of the health benefits and antioxidants that are depleted by heat.

Comments Off on The Health Benefits of Pumpkin Seed Oil