The Link Between Milk and Acne 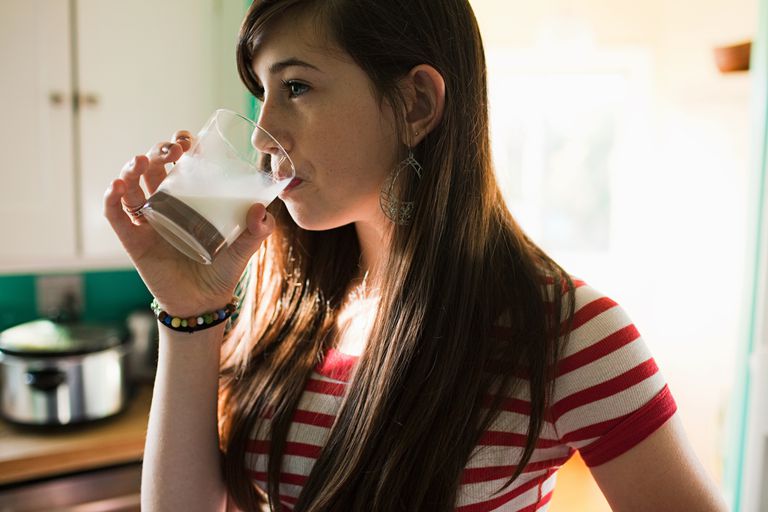 Some doctors believe that what we eat may indeed affect our skin and make acne worse. Surprisingly, they’re not pointing fingers at chocolate or potato chips, but instead at milk.

Some research has shown a correlation between milk intake and the incidence of acne. It seems milk drinkers develop more severe acne than non-milk drinkers.

One study, published in the May 2008 issue of the Journal of the American Academy of Dermatology, looked at the diets of teenaged boys. The young men who drank the most milk also tended to have the worst acne.

This supports the results of previous studies, during which teenage girls were asked to keep food diaries and monitor breakout activity. Again, girls whose diets were rich in dairy products had more severe acne than the rest.

Of all dairy products, milk was the worst offender. Chocolate milk, cottage cheese, and sherbet also had a negative effect on the skin. But other dairy products didn’t seem to cause breakouts.

Interestingly, skim milk induced breakouts more often than whole milk, so it seems fat content in milk isn’t the culprit. And those who took vitamin D supplements didn’t have more breakouts, so vitamin D isn’t thought to be the cause either.

Fatty foods also didn’t trigger breakouts. And the foods that many people associate with causing acne— chocolate, pizza, soda, and French fries—didn’t seem to increase breakout activity at all.

How Could Milk Affect the Skin?

Why would certain dairy products contribute to acne? Some think it’s the hormones found in milk. Milk contains androgen hormones, which have long been associated with the formation of acne breakouts.

Testosterone is an androgen hormone, and it is strongly linked to acne development. It’s most often thought of as a male hormone, but women produce testosterone too, although in lesser amounts.

Milk naturally is filled with hormones, including DHT. It’s possible that milk contains enough hormones to have an effect on the body, including the skin. People who are genetically predisposed to acne breakouts may have a stronger reaction to the hormones in milk, according to some researchers.

Many dairy farmers also give their cows additional hormones to stimulate milk production and enable the cow to produce more milk. As a result, most milk is very high in IGF-1.

IGF-1 is a growth factor that peaks in the human body during adolescence when acne is usually at its worst. It is believed that IGF-1, along with testosterone and DHT, trigger acne breakouts.

The processing of skim milk may explain why it is linked to acne severity more often than whole milk. Whey proteins are added to give skim milk a creamier consistency. Some speculate that these proteins impact acne development.

A Link Between Dairy Products and Acne Severity

That means that drinking a glass of milk, even several glasses of milk every day, isn’t going to cause someone with otherwise clear skin to suddenly start breaking out in pimples.

It’s important to understand that none of the studies have shown proof positive that milk causes acne. In fact, they show only a possible link between dairy products and acne severity.

That means that drinking a glass of milk, even several glasses of milk every day, isn’t going to cause someone with otherwise clear skin to suddenly start breaking out in pimples. The research shows that drinking milk may make acne worse for people who are already breakout-prone.

Of course, not everyone who drinks a lot of milk breaks out in pimples, and many disagree with these findings. The Dairy Council counters that the results are skewed, citing the fact that in one study, adult women were asked about their dairy intake during the years after they left high school.

And many medical professionals are wary of the conclusions being drawn because they don’t take into account other factors that may influence acne severity. They’re also quick to point out that the studies don’t link milk to acne development; they only establish a correlation between milk consumption and acne severity.

The biggest problem for researchers is proving this theory. There is no way to do a double-blind, randomized controlled trial (considered the gold standard in research) because there is nothing that can be used as an adequate placebo for milk.

There is still no hard evidence proving milk consumption causes, or even worsens, acne. Much more research is needed before this theory can be proven.

Still, some doctors are taking a new view of how diet affects the skin, and this no-dairy philosophy has its believers. Some dermatologists say they have had success in having their patients cut milk and dairy from their diets.

Is milk a trigger for you? Only you can tell. If you’re a big milk drinker, you might want to cut it out of your diet for several months to see if you notice an improvement in your skin, especially if your acne isn’t responding well to more conventional treatments.

Remember, acne tends to wax and wane all on its own, too. So, to really test out this theory for yourself, you’ll have to cut dairy from your diet for several months to get a good feel if it’s working for you.

Even if banning milk from your diet seems to improve your acne, it most likely won’t be enough to completely clear your skin.  For that, you’ll need an acne treatment medication.

Over-the-counter products might work if your acne is mild. But most people get the best results from prescription acne medications.