The Link Between Sugar and Cancer 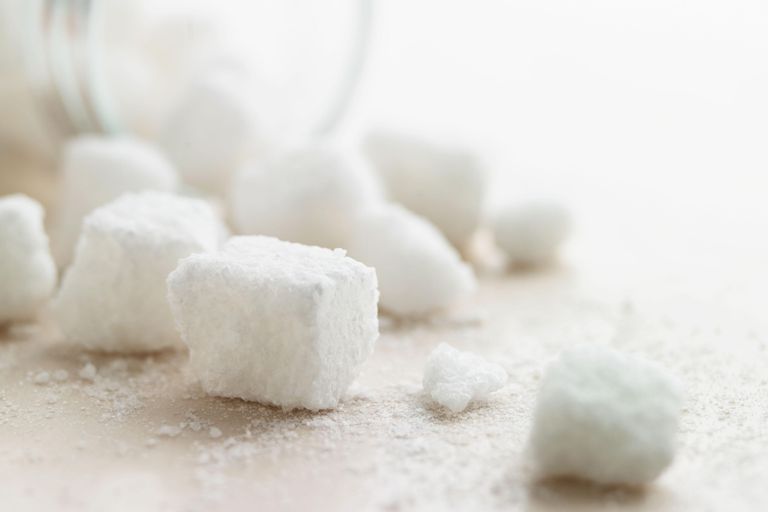 Does sugar cause cancer? If you already have cancer, can sugar make it grow faster? It’s a loaded question, but the answer is not so simple.

All of your cells need glucose (blood sugar) for energy. Healthy cells follow a life cycle of growth, division, and death. Like leaves on a tree, old cells die off and are replaced by an equal number of healthy cells. Cancer develops when old cells refuse to die but keep growing, dividing, and building up in one place—creating a tumor.

Does Sugar Cause Cancer?

The idea that cancer cells thrive on sugar has been around at least since the 1924 publication of Dr. Otto Warburg’s paper, On Metabolism of Tumors. Warburg was a Nobel Prize-winning cell biologist who hypothesized that cancer growth was caused when cancer cells converted glucose into energy without using oxygen. This was an interesting assertion, in part because we know that healthy cells make energy by converting pyruvate and oxygen. The pyruvate is oxidized within a healthy cell’s mitochondria. Since cancer cells don’t oxidize pyruvate, Warburg thought cancer must be considered a mitochondrial dysfunction.

But that’s not how cancer works. Cancer is caused by genetic mutations, either inherited mutations, or those that are acquired over time through exposure to carcinogens or as a consequence of the normal metabolism of cells. Although healthy cells and cancer cells do convert their food to energy in different ways, that difference is an effect, not a cause, of cancer. (Learn about the differences between cancer cells and normal cells.)

Despite finding the flaw in the sugar and cancer theories of the past, there does appear to be some link between excess sugar levels and cancer. It’s well known that people with type II diabetes have an increased risk of several cancers. It’s also been shown that an elevated blood sugar level may contribute to the formation of cancer cells (oncogenesis), resistance to cell death in cancer cells (apoptosis resistance) and tumors becoming resistant to chemotherapy. Whether this is of concern with “normally” elevated blood sugars, such as after a dessert splurge vs only in those who have insulin resistance and elevated blood sugars isn’t entirely certain.

It’s been said that cancer cells are immortal—they don’t die off in an orderly way as healthy cells do. Scientists have studied this effect and may have discovered what tumor cells do to avoid cell death. In laboratory research at Duke University, cancer cells appear to use a combination of sugar and specific proteins to keep growing when they should die. These cancer cells appear to use sugar at a high rate, in order to ignore cellular instructions to die off.

At Johns Hopkins University, a group of researchers looked at ways to fool cancer cells into growing more slowly and then eventually killing themselves. They studied abnormal glycosylation—how cancer cells put sugar and proteins together to sustain themselves. When these cells were given n-butyrate (a salt) with carbohydrates (complex sugars), their growth slowed. In order to feed the cancer a death-dealing drug, researchers produced a hybrid molecule made of a simple sugar and n-butyrate. Because the cancer cells absorbed the sugar readily, they soaked up this new molecule, which interfered with their ability to keep growing, and they died.

Other teams of scientists are working on drugs that will take advantage of cancer’s weakness for sugar. Some of these new drugs may be given along with chemotherapy, to make tumor cells more sensitive to chemo drugs. In Switzerland, scientists are using a sugar coating on “quantum dots” or nanocrystals of drugs that would travel to the liver only, avoiding other organs. It’s the sugar on those little doses that help the drugs target one particular part of the body, thereby reducing side effects and increasing the effectiveness of the drugs.

One of the elephants in the room when talking about sugar and cancer is obesity. Having a sweet tooth and consuming more sugar based foods is linked to obesity, and obesity is linked to cancer. Obesity alters hormone levels in the body which are associated with a greater risk of both developing cancer and having cancer recur or progress. According to the International Association for Research on Cancer, one of the best things you can do both to prevent cancer in the first place, and prevent recurrence if you’ve already been diagnosed, is to be as lean as possible without being underweight.

Be Smart About Sugar in Your Diet

Sugar provides energy but doesn’t give you any nutrients that are needed to reduce your cancer risk. Natural sugars are found in fruits and dairy products and can be part of a healthy diet. Added sugars—the kind that’s added to food during processing, such as white sugar, corn syrup, and fruit juice concentrate—should be avoided or limited. Consuming too many sugar calories can lead to obesity and high insulin levels, which would contribute to your increased cancer risk. Cut back on sugar-loaded foods such as candy, baked goods, sugary cereals, and sodas to reduce your cancer risk. Balance your diet with plant foods, fish, and whole grains—​parts of a healthy diet that have been linked to a lower risk of cancer.

It’s okay to eat some natural sugars on a daily basis, especially when they’re part of nutrient-dense foods, such as milk or fruit. Sugar in your diet does not cause cancer to develop. Starving all of your cells of sugar won’t kill or prevent cancer. Keeping a balance of nutritious foods and a regular exercise routine can give you a healthy body weight and normal insulin levels. That’s the sweet way to reduce your cancer risk.​

Comments Off on The Link Between Sugar and Cancer cancer