The Reality Surrounding the Ebola Vaccine 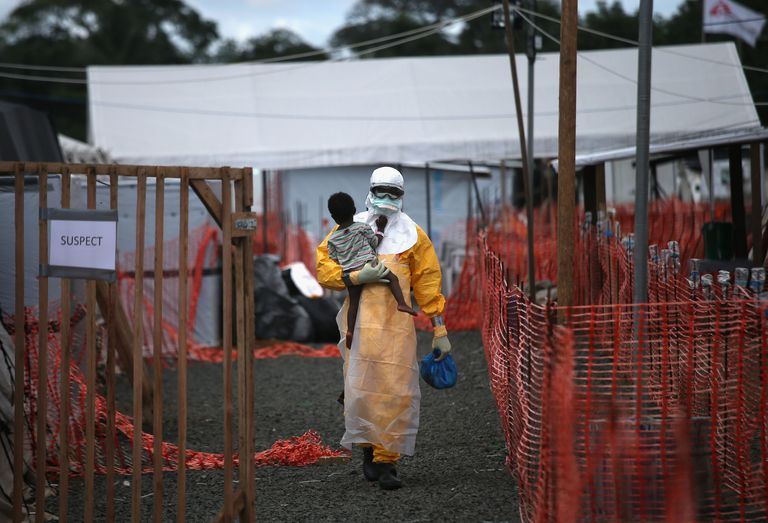 There’s a vaccine for Ebola. It’s a game changer.

There are no guarantees with Ebola. The virus is now receding thanks to the work of communities, governments, NGOs, international organizations, and many others. There is, however, always the risk that an outbreak could sprout up again. One unseen case could propagate another transmission chain. Another bat could seed a new epidemic.

We realize now that West Africa had Ebola before. A different, apparently less deadly, strain had been previously documented in West Africa (Tai). However, the same deadly strain that caused the 2013-2015 epidemic also left footprints in the region. The same deadly strain (Zaire) had apparently made small forays before. These didn’t explode into an epidemic like in 2014. However, there are a fair number of people who have antibodies indicating they had past infections with Ebola. Another bat could trigger another outbreak. Maybe it would flicker, maybe smolder, maybe explode. The fear, though, would remain.

The fear of Ebola would always hang over medical care. This could possibly delay care – or risk the health of providers. For a nurse, working possibly alone with minimal resources, this can mean never knowing whether it is safe to help. The pregnant woman arriving in labor, desperate for help, could always have Ebola. Usually, she wouldn’t and the nurse would be safe. However, as has been seen as Ebola numbers have dwindled, sometimes when it seems safe to help, it isn’t. In fact, Ebola infection can precipitate labor and assisting delivery can place caregivers at incredible risk.

Each time a nurse sees a new patient with a fever, some diarrhea, a headache, or a rash, it could be malaria, typhoid, cholera, Lassa, measles, or any other infection. Most times it wouldn’t be Ebola, but there would always be the chance that it could be Ebola, newly reintroduced or quietly propagating along. This could also delay care for other infectious diseases.

Ebola previously could only be prevented by working with communities and clinics to limit its spread. Treatment options were limited and many died. Many were scared of seeking treatment where many died; some were in denial. Because there could be no mistakes with Ebola, burying all with Ebola-safe protective equipment was needed, but this was incredibly draining financially and emotionally for communities. Using full protective gear for every patient encounter is incredibly difficult. It’s even more difficult in clinics where there isn’t the water supply needed to disinfect, let alone the stocking of all the supplies needed.

This meant the threat of Ebola might loom over the region for years to come. All medical interactions, all burials, could potentially pose a very small, but real, risk.

There’s now a new way to approach Ebola. It may even be a way to put an end to Ebola.

This Is Where the Vaccine Comes In

A vaccine would allow healthcare workers more safety when treating the illnesses that usually take more lives than Ebola – from malaria to accidents to complications of childbirth. Vaccinating healthcare workers would reduce their risk.

Vaccinating members of the general population could help prevent another outbreak. Not everyone would need to be vaccinated for the vaccine to help protect the region. Herd immunity could help create firewalls so no stray bat could lead to a large epidemic like one did in 2013.

The vaccine could also be deployed in “hotspots” where cases are identified in people, using the ring vaccination technique used in smallpox eradications, where those living in areas surrounding an outbreak or an infected individual are vaccinated.

Nothing can ever be perfect. But this vaccine has tremendous promise.

What Sort of Vaccine?

The vaccine is called a rVSV-ZEBOV vaccine. One dose injection of the vaccine is all that’s needed in the short term. The rVSV is a virus that can sneak in a protein from Ebola so that the immune system can make a response to it – without ever being exposed to Ebola itself.

Can the Vaccine Cause Ebola?

The vaccine does not contain Ebola. It only contains one glycoprotein derived from Ebola; not all 7. This means the vaccine cannot create Ebola infections.

It looks like it works well. The study documenting its efficacy in Guinea was published in the Lancet. Of those who were immediately vaccinated, none developed Ebola in the first 10 days (which is the average time between exposure and infection). Those who developed Ebola before the 1st 10 days may have already been infected when vaccinated. Others developed Ebola who were not vaccinated in the study – either because they were ineligible, they choose not to, or they were in a cluster that was randomized to be vaccinated later on (after 21 days).

How Do They Know It Works?

The authors of the Lancet study did something clever. Vaccine trials often take years, proceeding from Phase I to II to III. The fact that it took less than 1 year to go from Phase I to III trials is impressive.

This is not the first study on this vaccine. There have already been 8 Phase I trials showing that this vaccine seemed safe. There were some concerns about whether the side effects from the vaccine would be problematic, particularly arthritis, and whether the arthritis would be long lasting. There were also in some cases muscle aches and a vasculitic rash. However, the vaccine did appear to be relatively well tolerated.

It would be hard to show that the vaccine actually prevented infection in the real world — and not just theoretically. As time passed and the epidemic was better controlled, there were fewer and fewer cases. It would be harder to show that a vaccine was protective if the trial were not implemented quickly.

It’s also hard to arrange a vaccine trial quick enough to stop cases occurring, while also ensuring all the needed safeguards were in place. In particular, this means ethical considerations needed to always be at the forefront of trial design and implementation. Moreover, the trial can only be conducted if researchers legitimately do not know if the intervention will help, as it cannot deny anyone assistance that is known to beneficial. So once the trial appeared successful, it could not continue to deny anyone immediate vaccination.

In Sierra Leone, a similar trial of the same vaccine was started among healthcare workers, but there were so few cases and even fewer cases among healthcare workers, who had the protective equipment and training they needed to stay safe. No trial could be conducted where healthcare workers were not afforded the PPE (personal protective equipment) and systems needed for them to keep safe. As such, it seemed quite fortunately that there would not be enough Ebola cases in either arm of the study to know if any had been averted.

Likewise, in Liberia, a phase II trial of the same vaccine was successful, but it was unclear whether there would be any Ebola cases in the country in order to show efficacy of the vaccine.

In this trial, what the researchers did that was clever was to use ring vaccination. This is much like the eradication technique used in smallpox. They knew those at most risk for Ebola were those who were contacts of patients with Ebola. They could either be infected by the infected patient, by others infected by the patient or even by the person who infected the patient. The researchers arranged to identify clusters of all contacts and contacts of contacts for each infected patient identified. From this group, some clusters were immediately vaccinated, some clusters were vaccinated after 21 days, some individuals were ineligible (pregnant, breastfeeding, under 18 etc), and others chose not to or did not become involved.

This was enough information to say that this vaccine was effective to prevent Ebola. The trial was a success and ethically there was no reason to delay vaccination for anyone else.

The study was stopped because the data pointed to  a dramatic vaccine success. It seemed ethically wrong to withhold the vaccine from anyone else. Those who were waiting 21 days to receive the vaccine, it was decided, should ethically not wait any longer. The vaccine appeared to be effective and waiting did not seem ethical.

This does not mean however once the vaccine is used that every person will be protected 100%. We don’t know how long immunity lasts. We don’t know if some people will fail to respond. Immune systems may differ in how they respond to the VSV vaccine – based on genes, past infections, other factors affecting their immune system like co-infections or nutrition.

We just know that in this study, where the population was people at true risk for Ebola in West Africa, that only those who received the vaccine soon after presumed exposure had no infections 10 days later.

The VSV (vesicular stomatitis virus) is a member of the virus family of Rhabdoviridae, which includes rabies. It isn’t dangerous like rabies, but it can infect many animals – especially farm animals, like cattle, horses, and pigs. The virus is also found in rodents and insects, which is thought to be the reservoir, especially ​sandflies and maybe grasshoppers. VSV causes an infection that looks just like foot and mouth disease in these animals. It can spread to people – often causing no symptoms, but sometimes a flu-like illness, with lymph node swelling. It does not seem to spread among people. It has not been a disease that has been at all worrisome in people.

The rVSV used in the vaccine is recombinant VSV. This means where there was a glycoprotein G (used for viral entry) it is replaced with a single Ebola glycoprotein (GP).

Is rVSV Used in Other Vaccines?

VSV has been examined for potential use in other vaccines – such as for the similar Marburg virus, as well as for other targets, like Hepatitis B, Hepatitis C, SARS, many other infections for which immunization is difficult, and even against some cancers.

When Does the Vaccine Start Working?

It seems the vaccine works best if given at least a few days, maybe a week, before exposure, but it may have some benefit even when given immediately before (or maybe even after exposure – but we do not know yet). In this trial, there were 4 cases in those who were vaccinated and presumably were already infected, as they developed infection on day 0, 2, 6 and 6.

Likewise, a study showed that if a single dose of the same vaccine was given to monkeys (macaques) 7 days (but not 3 days) before being injected with Ebola, the monkey was protected. Some monkeys were given the vaccine at 7 days; others 28, 21, 14, or 3 days before the monkey was injected with Ebola; others were given a vaccine for another virus (Marburg). All those vaccinated with one dose 1 week prior to injection to survived. Of those at 3 days, 1 died, 2 were ill; the placebo (Marburg) group all died.

The vaccine seemed to trigger an innate immune response and fast action. In general, though, antibody responses appeared to play a large role in how the vaccine worked.

Is the Vaccine Available?

The vaccine has not yet been made widely available. The WHO and GAVI are working to ensure the vaccine does become available.

Is This the Only Vaccine That Might Be Available?

There were also trials on other types of vaccines. These included one with an adenovirus vector that has been tested in Liberia for safety, but without any efficacy trials. Another trial focused on a prime boost vaccine, supported by Johnson and Johnson and Oxford University, which is supposed to have a Phase II trial run in 2015. The prime boost vaccine requires more than one dose to be effective.

These vaccines, however, to date do not yet have the supportive data that the rVSV vaccine does at this point.

Comments Off on The Reality Surrounding the Ebola Vaccine prevention & treatments