There are various types of sugar, chemically speaking. All types of complex sugars, breaks down during digestion into two simple sugars, namely, glucose and fructose. 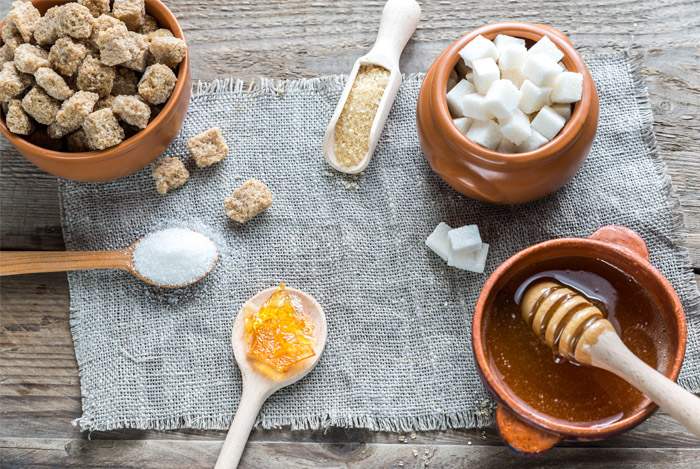 There are different types of sugar depending on their source:

Glucose is the foundation for the Glycemic Index (GI), which ranks foods on how they affect our blood glucose levels. This index measures how much your blood glucose increases in the two or three hours after eating certain foods. Table sugar, or sucrose, has a GI of 60. Eating low (below 50) on the glycemic index can help you control your blood sugar naturally.

Refined, granulated sugar is derived from sugar cane or sugar beets. It is 50% glucose and 50% fructose, and is highly processed using multiple fossil-fuel- and chemical-intensive processes. It provides empty calories and zero nutritional value. Additionally, the fact that over 65% of commercial sugar is made from genetically engineered (GMO) sugar beets makes white sugar something to be avoided at all costs. Crystalline fructose on the other hand is slightly finer than “regular” sugar and is used in dry mixes such as flavored gelatin and pudding desserts, and powdered drinks. It is made totally from fructose and is definitely harmful to your health. One level teaspoon white sugar or 4g supplies 68kJ (16 Calories), no protein, no fat and 4g of carbohydrate, 4g of sugars, 2g fructose and 2g glucose.

These type of sugars are brown in colour because, unlike white sugar, they have not had all of the molasses chemically and physically removed. The least processed of the brown sugars—Rapadura or panela—often still has the minerals and enzymes intact. Brown palm sugars differ in texture and taste from brown cane sugars, but are often minimally processed as to still contain trace minerals too. Brown sugars can be used in cup-for-cup substitution with white refined sugars. Brown sugar tends to clump because it contains more moisture than white sugar. Muscovado sugar, Demerara sugar are all example of brown sugar. 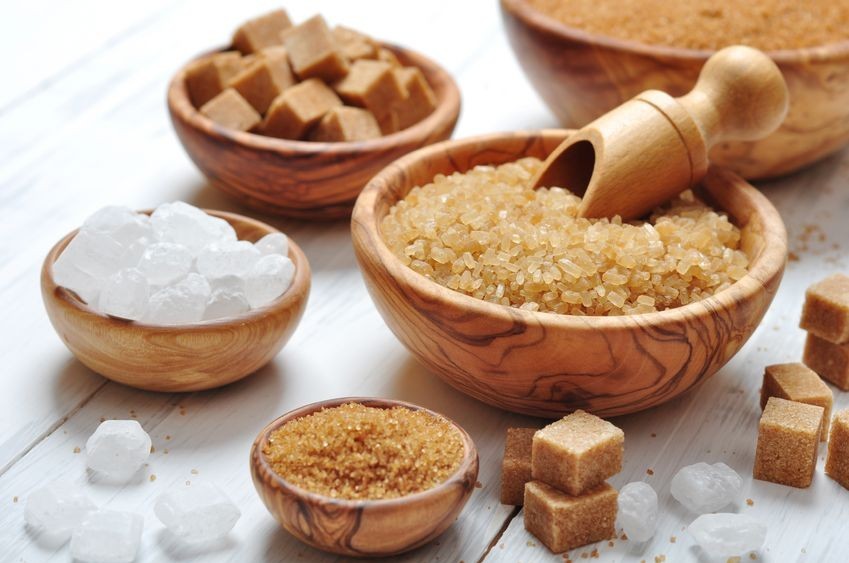 It is a traditional sweetener that has been used for thousands of years. Because it comes from tapping trees that require little water and help build agroforest ecosystems, it is also the most sustainable produced granulated sugar in the world. Palm sugar was originally made from the sugary sap of the Palmyra palm, as well as the date palm or Sugar date palm. Now it is also made from the sap of the sago and coconut palms and may be sold as “coconut sugar.” Date sugar can also be made with the fruit of the palm by pulverizing very dry dates, but note that sugar made this way will not dissolve well in liquid.

Palm sugar varies in color from a light golden color to a rich dark brown. It tends to be extremely grainy, with dried forms being highly crumbly, and it is typically minimally processed. Many people like to use palm sugar in cooking because it is so coarse and unprocessed, and many Southeast Asian recipes call specifically for palm sugar. The light processing leaves much of the flavor of the sugar intact, creating an almost molasses-like flavor. Palm sugar is lower on the glycemic index than cane or beet sugar. Palm sugar is sold as “coconut sugar,” which can be a bit confusing, since coconut fruits themselves are not actually involved. It is also sometimes marketed as “coconut nectar,” “palm honey” or jaggery. Asian markets are a good resource for palm sugar, and it can also be ordered through specialty retailers.

It is usually made from corn, but it can be produced from other starches like potatoes and rice. Chemically speaking, true glucose syrup/corn syrup consists mainly of glucose sugar; however, some companies like Karo add fructose to their products. It’s commonly used as a sweetener plus emulsifier for food items that require a smooth texture like hard candy. Although glucose itself rates a 100 on the glycemic scale, corn syrup generally falls around 75.

A combination of dextrose and fructose (broken down from sucrose through honey bee’s digestion) in a nearly 1:1 ratio (with other components such as water, wax, nutrients, etc.). Rawhoney has a glycemic index of about 30, but processed honey clocks in around 75. Those who have a harder time digesting fructose can often tolerate honey. Although conventional processing destroys much of honey’s natural benefits, raw honey serves up a (many claim therapeutic) dose of antioxidants, minerals, vitamins, amino acids, and enzymes.

This sustainably-produced, viscous amber liquid with its characteristic earthy sweet taste is made from the sap of the sugar, black or red maple tree. Maple syrup contains fewer calories and a higher concentration of minerals than honey, and is an excellent source of manganese, and a good source of  iron, calcium, magnesium, potassium, phosphorus, copper and zinc. It has a GI of 54 and is low in free fructose but high in the fructose-glucose disaccharide sucrose. Nutritionally speaking, it contains manganese, iron and calcium.

A thick, brown to deep black, honey-like substance made as a byproduct of processing cane or beet sugar. It is enjoyed as a sweetener in many countries, and most particularly in England where it is called treacle. The process by which it is extracted and treated with sulfur results in fortification of iron, calcium and magnesium. Calories in molasses are approximately the same as sugar, about 16 calories per teaspoon (5 ml), however it only contains about half the sucrose as sugar. It is also made up of both glucose and fructose. 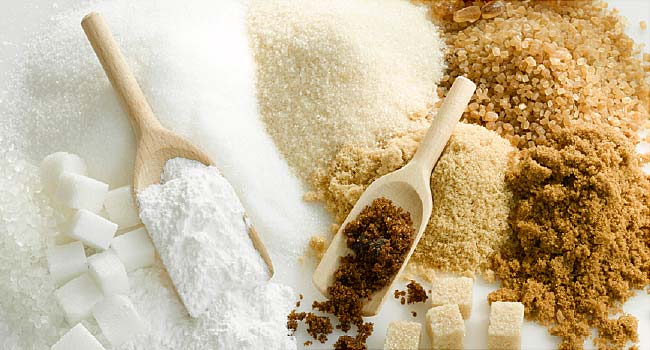 Agave nectar (sometimes called agave syrup) is most often produced from the Blue Agaves that thrive in the volcanic soils of Southern Mexico. Agaves are large, spikey plants that resemble cactus or yuccas in both form and habitat, but they are actually succulents similar to the familiar Aloe Vera. The sweetener has enjoyed growing popularity for some time, but experts are beginning to question whether agave nectar lives up to its reputation. Agave nectar is often heralded as low on the glycemic index, however, processing techniques result in a 75% or more fructose content. Agave syrup is not a whole or traditional food. It is a factory-made, modern product, and like all processed foods, agave syrup is missing many of the enzymes and nutrients that the original plant had to begin with. It contains very high amounts of fructose that the human body simply wasn’t designed to handle.

It is a sugar substitute native to the Andean region of South America. It is glucose-free, and does not increase blood sugar levels. Because of this, yacon syrup is often recommended as a sweetener to those suffering from diabetes or at risk for becoming diabetic. The syrup is derived from the roots of the yacon plant, and according to some studies is a good source of antioxidants. The syrup also contains up to 50% of FOS (fructooligosacharides). The consumption of FOS does not increase blood glucose.Yacon syrup is usually made with minimal processing in an evaporator, like the ones used to make maple syrup. Yacon syrup is often compared to molasses, caramel, or honey in taste, with a deep and rich, mildly sweet flavor. It easily substitutes for maple syrup or molasses in recipes, and can be used to sweeten beverages. It is typically sold in jars like honey, and can be purchased online or at specialty food stores.

White crystalline powder with a GI at the maximum of 100. It is the standard by which other carbs are ranked. At 100, this means that glucose is rapidly absorbed into the bloodstream and stimulates a fast insulin response. Glucose powder is not as sweet as regular white sugar so is fed to invalids as they can take in more food without being put off by the excessive sweetness. Athletes often notice glucose (under the term dextrose so you don’t associate it with glucose or sugar!) marketed to them to use when they need instant energy.

Sugar is sugar, whether white, brown or raw. All sugars are pretty much of a muchness. One teaspoon of any has around 68 kilojoules (16 Calories). Check out, Sugar Content of Popular Foods.