Top 10 Reasons Why You Are Facing Hair Loss

Hair grows in repeating cycles. The active growth phase lasts around two years and is followed by a resting phase that spans three months, after which the hair falls from the scalp. Normally, every strand of hair in your head is at a different point in this cycle, so the shedding is barely noticeable: a few strands in the shower drain, some more on your brush, a hair or two on your pillow. A normal head sheds at most 100 strands of hair a day. 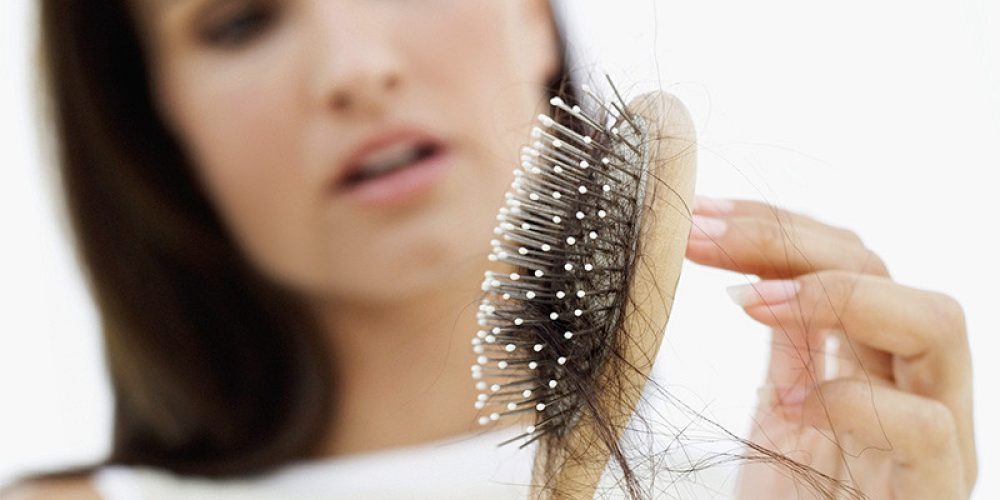 Today one in every four women is facing hair loss, a potentially devastating problem. We’ll explain the top reasons behind it and how to fight it!

Stress:  A sudden physical or emotional stress may cause one-half to three-quarters of the hair throughout your scalp to shed (called Telogen effluvium). When the body undergoes extreme stress, as much as 70 percent of your hair can prematurely enter the resting phase, called the telogen phase. Three months later, these hairs begin to fall out, causing noticeable hair loss called telogen effluvium. In most cases hair will begin to grow back within six months. In a very small percentage of people, however, telogen effluvium may be only the trigger for more long-term hair loss. Yoga and meditation can help you manage stress.

Marital Status:  In one experiment, scientists analyzed eighty-four female identical twins and asked them to fill out questionnaires describing their lifestyle. Hormone blood level of all the women was also tested, and an extensive photo analysis of their hair was done. The results revealed that the strongest predictor of women’s hair loss was their marital status. Those ladies who were divorced or widowed showed more hair loss when compared to their married counterparts. The study were presented at the annual conference of the American Society of Plastic Surgeons (ASPS) during September 2011 in Denver. Hormonal changes: The male hormone testosterone is thought to be closely linked to hair loss. When testosterone is changed in the body to DHT (another type of hormone) through an enzyme reaction hair loss can occur. This new enzyme binds to the cells of hair follicles at special receptor sites and decreases the growth stages of hair and increases the resting phase. Over a period of time this can lead to excess hair shedding, limited growth,hair thinning, and eventually baldness. Similarly hormone levels rise significantly during pregnancy, and estrogen levels fall, causing normal hair loss to be postponed.  Approximately three or four months after childbirth hormone levels return to their natural levels, disturbing the hair growth and loss cycle.  When this happens, the hair loss that did not occur during pregnancy happens all at once.  Fortunately, the hair growth process stabilizes after this process and returns to normal after not much delay. With peri-menopause or menopause normal hair growth should return once the hormonal changes subside.

Surgery: For hair loss due to radiation therapy, medication use, or other causes, no treatment is necessary. The hair will usually grow back when the illness has ended or the therapy is finished. You may want to wear a wig, hat, or other covering until the hair grows back. One of the biggest concerns many people have – especially ladies – about having gastric bypass surgery is hair loss.

Skin Conditions of the Scalp: Skin conditions that lead to hair loss include seborrheic dermatitis (dandruff), psoriasis, and fungal infections such as ringworm. Folliculitis, an Infection of the hair follicles may lead to hair loss as a side effect. Severe cases of psoriasis may cause temporary hair loss, but the hair grows back once the condition has been treated and is under control. Iron Deficiency: The most important function of Iron in the human body is helping the production of both hemoglobin (the substance that carries oxygen withing red blood cells) and myoglobin. Myoglobin is a form of hemoglobin found in muscles. Iron is also involved in the oxygenation of the body’s red blood cells. It is understood that levels of iron play a significant role in various body functions, however, it is also essential for the normal growth and maintenance of hair. If the amount of energy used up by the body is not replaced by food intake, then other non-essential stores will be used up. Unfortunately, this means the hair cells as they are not a vital part of living. You can maximize your iron absorption by eating a combination of iron-rich foods such as red meat, green, leafy vegetables, shellfish, egg yolk, nuts and cereals with food or drinks that are high in vitamin C for example, a glass of freshly squeezed orange juice. Avoid tea until at least an hour after eating as it contains tannin, which interferes with iron absorption.

Excessive Styling: A Cleveland Clinic study found 30 percent of middle-aged black women are balding due to everything from chemicals to tight braids and ponytails. To protect your locks, set your hair dryer on low, keep your styling tools at or below 347 degrees Fahrenheit, and heat your locks no more than two or three times a week. Avoid products with ammonia and styles that pull on the hair. Styling damage may be reversible, but the top cause of female hair loss isn’t. Excessive shampooing and blow-drying

Heavy smoking was a significant contributor to female hair loss in the temple area. Don’t dye your hair more than one or two shades its normal color: The more severe the color change, the more chemicals you require, which can make hair break. Nervous habits such as continual hair pulling or scalp rubbing. Trichotillomania (trik-oh-til-oh-MAY-nee-uh) is an irresistible urge to pull out hair from your scalp, eyebrows or other areas of your body. Hair pulling can be a way of dealing with negative or uncomfortable feelings, such as stress,anxiety, tension, loneliness, fatigue or frustration.

Certain Health condition:  Hair loss in the coronal area (nearer the top) of the head among women has been linked to being diabetic. A number of medications, including retinoids, birth control pills, beta-blockers, certain antidepressants, NSAIDs (including iburpofen) and calcium channel blockers can cause hair loss. Thyroid disorder can cause hair loss. Hyperthyroidism (too much hormone) may cause inexplicable weight loss, heart palpitations, nervousness, irritability, diarrhea, moist skin, muscle weakness, and a startled appearance of the eyes. You may also experience hair loss as metabolism speeds up. Similarly, during Hypothyroidism (too little hormone) hair, nails, and skin may become more brittle and break more easily.

Last, Hair loss can be genetic, known as androgenetic alopecia and, according to the American Academy of Dermatology, is the most common cause of hair loss.