Need help understanding men in a long distance relationship? What can you do about a man who is pulling away? Discover how to handle the lag in his attention. 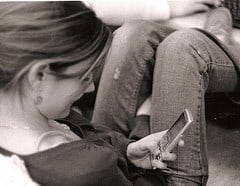 Is He Pulling Away?

I met this great guy online and we’ve been ‘dating’ long distance for 7 months. I live in California and he lives in the U.K.  The moment we started chatting, we hit it off and talk or message every day,. We’re very attracted to each other and have already exchanged I love you’s.

I finally met him and we had a blissful two weeks of bonding together. Of course, we were intimate (6 months of physically longing for each other is a long time!) and the sex was fantastic. It was difficult to leave him after spending every waking moment together and he even introduced me to his parents and I spent time with his 3 year old son.

When He Pulls Away Should I Ignore Him?

Now, being back almost a week I feel some anxiety. Maybe it’s separation anxiety? We’ve Skyped only a few times this week and he’s had visitors so I haven’t ‘seen’ him. He messaged me, told me he loves me, but other than that, hasn’t initiated contact in a day or so.

Maybe I’m over thinking this, but could it be that he’s pulling away from me? It feels like I have more of a need to see and talk to him than he does for me. It’s not that he’s cold, it’s that he’s become unavailable. When he pulls away, should I ignore him?

I knew going in that a long distance relationship would be hard. It’s difficult to know what to do or how to act when he isn’t physically here.

What Can I Expect in a Long Distance Relationship?

Should I call or message him when he’s not initiating contact? What’s the protocol in a long distance relationship and what should I expect? I read with great interest your stand on women ‘pursuing’ men (don’t do it) but I hate to think that he and I haven’t already established an open line of communication by now.

He hasn’t indicated any level of annoyance when I’ve gone overboard trying to reach him, but I don’t want to push him away by appearing desperate or needy. (Even though I feel like I am!)

Does He Need Space?

So I wonder: Is it necessary to give someone ‘space’ when there is already an abundance of geographical space? Is Skyping everyday and chatting while we play an online game together too much? I am really into this man and am hopeful about a future together.

Please help me with some of your amazing insight,
California Dreamer”

You could be over thinking this and are showing signs of having an Anxious Attachment style according to Dr. Amir Levine’s book Attached.  It’s not a bad thing, but it is important to recognize what triggers your anxiousness. Distance could certainly do it as well as declining availability.

Because you’re anxious, you’re looking for a bit more security and assurance that your relationship is still on track.

However, you also admitted it’s only been a day or so since you’ve heard from him. That might be a change, but not necessarily a new pattern right? You are feeling insecure and that’s putting you on alert which might be premature.

You probably need more time to know for sure if he’s pulling away. I will say that keeping up that kind of daily contact is not easy. Sometimes after actually meeting, the excitement can slow down or even wear off. That certainly has been known to happen.

When He Pulls Away, Give Him Space

While I agree, you’ve been ‘seeing’ each other for seven months, that’s not a true relationship. Skyping and gaming are not the same as a relationship with face-to-face dates. Yet, even if he lived near by, I would give the same dating advice which is this: Give him space. You have already seen that pushing is not working, so it’s time to back off.

When he pulls away and you give him space, one of two things will happen:

However, both of these options are BETTER than pursuing him further. If he is just busy with visitors, you’ll look unappealing and desperate for his attention and that could much things up for sure.

Give Him Space to Miss You

When it comes to understanding men, know that a relationship is often like a dance, even as years go by. Sometimes you simply have give him space to miss you. Otherwise, he can feel cornered and withdraw further which is not the reaction you want.

I could be completely off base, but I have heard this kind of story before. You think you are “dating” for months. The fantasy was romantic and fun for both of you. Then you meet and have an amazing time. it’s fun and incredibly romantic. Sadly, this has nothing to do with building a future together. Nor does it indicate whether or not he is serious about you.

I encourage you to let go and see what happens. It’s not easy, especially when you area feeling anxious. But you’ll see how he responds. If he comes back to you, then you know he really cares. If he doesn’t, better to know that he’s no longer interested.

One way to another, you might as well find out rather than waste several more months on a fantasy relationship with a man who doesn’t want what you want – true love. Understanding men in terms of their interest is a whole lot easier when you simply watch how they treat you and what they do to keep you.

Watch What He Does

If a man only has time to text, takes hours to respond, or let’s day go by, he’s letting you know that you aren’t that important to him. The most important thing to use as a measure of a man’s genuine interest is what he does to spend quality time with you. Far more telling that words which are easy and might mean very little.

If he starts talking about your next visit, then he’s planning to be with you again and that is a more positive sign for a future. but if you don’t want to move there and you aren’t sure if he’d move to you, this long distance relationship might not be going anywhere.

Dating Advice for the Future

Comments Off on Understanding Men in a Long Distance Relationship dating