What Catecholamines Do in the Body 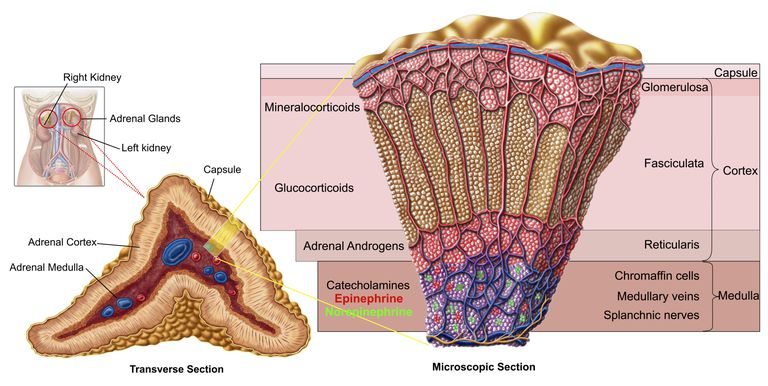 Catecholamines are produced by the adrenal glands as a reaction to stress. Stress to the body results in an increase in heart rate, blood pressure, muscle strength, mental alertness, blood glucose levels and breathing. Catecholamines reduce the amount of blood that flows to the skin and intestines but increase the amount of blood going to the brain, heart, and kidneys. Catecholamines are responsible for general physiological changes that prepare the body for a fight-or-flight response to stress.

Testing of catecholamine levels is conducted to confirm or rule out rare tumors. It may also be conducted to monitor the recurrence of tumor after the tumor is treated or removed. It is also a useful test for patients with persistent hypertension.  It is a sensitive test and is affected by stress, drugs, smoking, drinks that contain caffeine and alcohol.

Testing for catecholamine levels may also be conducted if there is suspicion of a catecholamine-secreting tumor and if a patient, younger than age 40, exhibits symptoms such as:

The test may also be performed if there is a family history of pheochromocytoma, a rare tumor.

Catecholamine levels are measured most often with a urinalysis than a blood test. The test is conducted most often after the patient has fasted for a significant amount of time because certain foods and medicines may affect the results. Patients will need to avoid the following foods for several days in preparation for their test:

Patients who are being tested will most likely be asked to avoid stressful situations and not exercise vigorously for several days before the test.

Patients should check with their physician before their test because certain medicines may affect the outcome including:

Comments Off on What Catecholamines Do in the Body