What Is the Grapefruit Diet? 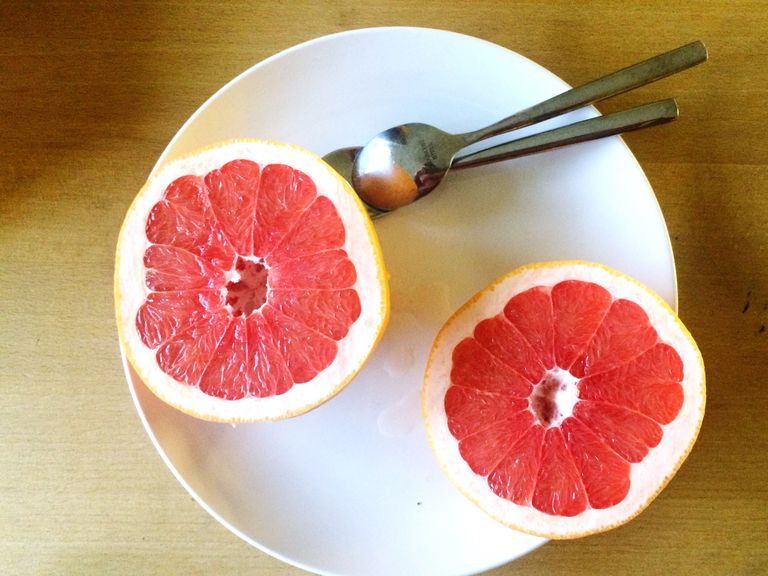 The grapefruit diet has been around for decades in various versions that tend to be extremely restrictive and promise huge weight loss in short periods of time. It’s true that grapefruit is a nutritious fruit, but it does not have any magical power to rev up weight loss.

“While grapefruits are good for you, the health and fat-burning promises of the grapefruit diet are not evidence-based. The diet’s small portions and limited food options are not sustainable, and grapefruit has a high risk of interacting with many medications and conditions.”
—Kelly Plowe, MS, RD

The first grapefruit diet is believed to have emerged during the 1930s when it might also have been known as the Hollywood diet. Over the years it also became associated (wrongly) with the Mayo Clinic. In 2004, the book “The Grapefruit Solution” suggested eating grapefruit to improve the success rate of the weight-loss plan of your choice. The grapefruit diet, or diets incorporating grapefruit, pops up periodically as the latest diet trend.

Although many versions exist, the basic premise of the grapefruit diet is to consume grapefruit prior to all three meals a day, for 10 to 14 days. In addition, there is a restrictive eating plan for those three meals which cuts out many foods and calories.

As the cornerstone of this diet, the serving size is half a grapefruit, or 8 ounces of grapefruit juice. You can also purchase powdered grapefruit in capsule form. For any of these, consume prior to the rest of the meal.

Some forms of the diet call for eating two eggs and two strips of bacon every day for breakfast (after the grapefruit).

Lunch and dinner on the grapefruit diet consist of a serving of meat along with vegetables. The diet makes no distinction between lean proteins and those with lots of saturated fat, and it doesn’t limit serving size.

Along with your meat, consume a salad or some cooked veggies (some versions specify red or green vegetables only). In most cases, any kind of salad dressing is permitted.

There is no room in this diet for any other fruit choices, only grapefruit.

All of these are excluded on the grapefruit diet, which makes it very restrictive.

Drink plenty of water and a cup or two of tea or coffee per day.

Some versions do allow for one 8-ounce glass of skim milk per day. Other than that, no dairy products are permitted.

While there can be some variation in the grapefruit diet instructions, all call for eating the grapefruit (or drinking grapefruit juice) prior to meals. They’re also consistent in calling for three meals a day and no snacks.

If you do not care for the taste of grapefruit, you can purchase capsules containing powdered grapefruit. However, you’ll miss out some of the nutrition and all of the fiber you would otherwise get from eating the whole fruit—which is one of the actual benefits of a grapefruit diet.

Remember: Consuming grapefruit, especially frequently or in large amounts, with certain medicines (more than 50 of them and counting) can have adverse health effects. If you’re on any medications, check with your doctor before adding grapefruit to your diet. Some of the more common meds on the avoid-grapefruit list include:

Just adding grapefruit to your regular diet (without following the grapefruit diet) could offer some benefits, possibly even including weight loss. It is an excellent source of vitamins A and C and the antioxidant lycopene, as well as some flavonoids. It is low in calories and is lower in carbohydrates than some other fruits.

An 80-calorie grapefruit has nearly three grams of naturally occurring fiber. It’s a low-calorie snack and a filling one that will leave you less likely to keep on eating.

It’s much pretty impossible to go overboard with grapefruit. Between the tart taste and the time it takes to peel them, you can’t mindlessly munch your way through several hundred calories’ worth like you might with other snacks.

One small study showed that eating grapefruit could lower blood sugar and lead to weight loss. Participants who ate half a grapefruit before meals for 12 weeks lost significantly more weight than a non-grapefruit-eating control group. Another much more recent study identified a compound in grapefruit that might help reduce body weight, but the study was done in mice. A third showed no change in weight after a six-week dietary intervention (eating half a fresh grapefruit three times a day), although there were some decreases in blood pressure and cholesterol levels.

So grapefruit, on its own, may certainly have benefits. But a grapefruit diet is a different matter, and it’s not recommended.

As described, the diet is very low in calories and far too restrictive to be healthy, since it excludes almost all carbohydrates and many nutritious foods (such as whole grains and fruits other than grapefruit). Following it might also result in consuming too much saturated fat, as well, since it suggests eating meat twice a day without any recommendation to favor lean proteins.

One common belief about grapefruit is that it contains a special enzyme that helps burn fat. This is not true. Eating any fruit before a meal could help with weight loss because it takes the edge off your hunger and could curb the number of calories you consume. And despite the small studies that show some weight loss effects with grapefruit, overall there is very little high-quality research (large, randomized studies in humans) that supports this claim.

Another argument for grapefruit is that it’s a “negative calorie” food, which means that you burn more calories chewing and digesting the fruit than you consume eating it. And when we burn more calories than we consume, we lose weight. Yes, grapefruit contains a reasonably small number of calories, but it’s not like celery in which you’d need to chomp your way through four 12-inch stalks before taking in 40 calories. Just half of a medium grapefruit has around 40 calories. So unless you’re doing jumping jacks while you peel, eat, and digest it, it’s unlikely you’re burning more than you’re consuming!

Lastly, one study suggests that simply smelling the essential oil that comes from grapefruit can help curb cravings. But this single study was done in mice, not humans.

The grapefruit diet shares many (unfortunate) characteristics with other fad diets, while containing a kernel of useful advice for people who are looking to lose weight.

The Department of Agriculture dietary guidelines suggest consuming a balanced diet of fruits, vegetables, grains, proteins, and dairy products. Since it effectively eliminates several of these categories, the grapefruit diet doesn’t meet this standard.

In most of its versions, the grapefruit diet tops out at less than 1000 calories. That’s far fewer than the amount recommended by the USDA, even for people who are trying to lose weight. This tool can calculate a healthy calorie goal that’s personalized for you.

Here’s how the grapefruit diet stacks up against some other diets that claim to offer quick and easy weight loss.

While the grapefruit diet commonly found online is not a good idea, eating more grapefruit might be, especially if you are trying to lose weight. It offers lots of nutrition in a low-calorie package. Additionally, you’ll need to be cautious about eating too much grapefruit if you’re on any of the medications that interact with it. In general, look for an eating plan that doesn’t cut out major food groups, offers slow and steady weight loss, and is safe and healthy for you and your needs. Your doctor or a registered dietitian can help.

It May Not Be Healthy and Practical to Lose Weight Quickly


Best Clickbank Products
Comments Off on What Is the Grapefruit Diet? nutrition for weight loss