Why Do Potatoes Have a Higher Glycemic Index Than Sugar? 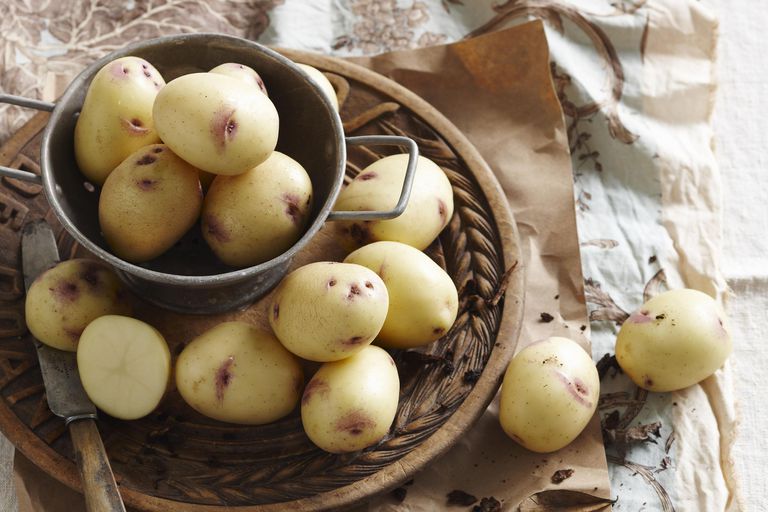 It can be surprising to find out that potatoes are generally high on the glycemic index (GI), which rates how much certain foods raise your blood glucose. After all, it’s a staple in diets throughout the world because potatoes are an affordable and nutritious vegetable. Plus, most people associate blood sugar with foods that contain sugar.

How is it that a potato has a higher GI than white sugar? It’s all about the starch and how it converts to glucose in your body. However, not all potatoes are created equal and there are ways to lower their impact on your blood glucose. You may still be able to enjoy a few potatoes here and there, you’ll just want to keep your servings in check.

Glucose in Potatoes vs Sugar

Too often, glucose is associated with sweetness and regular white potatoes are not a food that’s generally considered sweet. Potatoes are almost all starch, though, and that starch is made up of long strings of glucose.

Sucrose (table sugar), on the other hand, has a GI of 59 and is a disaccharide (two sugar) molecule. It is made up of one glucose molecule and one fructose molecule joined together. Fructose is processed differently in your body than glucose, and it doesn’t affect your blood sugar as much. However, fructose causes problems of its own when you eat too much of it.

With that, it’s fair to say that an ounce of carbohydrate from potatoes has twice the glucose as sugar. When you think of it that way, it’s only logical that potatoes would raise blood glucose more.

In one study, researchers put seven potato cultivars to the test: Russet Burbank, Maiflower, Nicola, Bintje, Carisma, Desiree, and Virginia Rose. Of these, they found that the Carisma potato had a GI of 53, making it the only one of the group to be classified as “low-GI.” The Nicola was the next highest at 69 GI, falling into the “medium-GI” category. Russet Burbank potatoes, which are very popular, ranked the highest at 82 GI.

In general, potatoes can range in GI value from 53 to 111, with white potatoes typically showing up lower on the index. Leaving the skin on adds fiber, which can reduce the potato’s effect on glucose. Often, the sweet potato is rated with a GI in the mid-40s, so it is a good alternative.

The GI Can Be Misleading

In the case of potatoes, the different studies used to compute the index have results anywhere from 53 to 111. Each of those studies was run on a number of people and only the average was reported. So, the glycemic index number itself might not mean much to any given person.

The upshot is that different people have different responses to different foods. The most significant point is how your own body reacts to a potato, which you can find out with a blood glucose meter.

This is especially important if your body is on the diabetes spectrum and doesn’t process sugars well. High blood sugars take a toll on your body, making damage to your pancreas and other complications from diabetes more likely.

Potatoes have many nutritional benefits and a regular serving of potato is considered to be 150 grams. Their glycemic load will depend on how much you eat at one time and what other foods you have with the potatoes. Most of the time, potatoes are eaten as part of a meal rather than by themselves and that will modify how they affect your blood glucose.

For instance, if you eat a low-carb meat with a small potato side and a salad, the meal is balanced. The other foods can actually reduce the effect the potatoes have on your glucose. The same can be said for low glycemic foods like beans and many vegetables. If you cook potatoes into a dish that has plenty of fat, protein, or fiber, the glucose effects are also diminished.

While potatoes can be quite high in glucose, keep in mind the things you can do to reduce it. If you want to eat potatoes, select a lower GI potato variety, enjoy smaller servings, and pair potatoes with foods that counteract the glucose. Most importantly, monitor your blood glucose and see how these changes affect you personally.

Comments Off on Why Do Potatoes Have a Higher Glycemic Index Than Sugar? diet plans